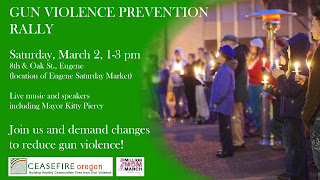 Last weekend I was proud to take part in a Rally for Gun Violence Prevention, in Eugene, Oregon.  It was sponsored by Ceasefire Oregon Education Foundation and Million Mom March, and endorsed by the Democratic Party of Lane County Peace Caucus.

The program began with instrumental music by Eugene’s Stewart Aubel, then two speakers: Betsy Steffensen, from Million Mom March, and David Hazen, from Eugene City of Peace.  Betsy spoke about the need for reasonable reforms to keep guns out of the hands of those who would abuse them, and David spoke about the need to foster a culture of peace in ourselves and our culture, including a proposal to require conflict resolution training for school students, prisoners, and gun owners.

In the middle of the program we had three songs by Eugene singer/songwriter Peter Almeida, who coordinated the musical portions of the event, including a sing-along with John Lennon’s “Imagine.”

Then we had two more speakers:  Eugene Mayor Kitty Piercy, and then myself for Ceasefire Oregon Education Foundation.  Mayor Piercy spoke about an organization she belongs to, Mayors Against Illegal Guns, and what they stand for, spoke in favor of an ban on semi-automatic assault weapons, and then made an appeal for both sides to enter the gun debate with respect for the other side’s views.  I spoke about the ways that gun violence has affected my life, and called for legislative reforms, including universal background checks, a ban on assault weapons and high-capacity ammo magazines, and keeping guns out of schools.

The program ended with another song by Peter Almeida, and then more instrumental music from Stewart Aubel.

We would like to thank the City of Eugene and the Eugene Saturday Market for allowing use of their space, and the Bijou Art Cinemas for advertising.


Media attended the event.  Here is some news coverage for the event:

An example quote from each of the speakers (with timestamp from the Lance Jacobs video linked above):

(0:51):  [I'm] for responsible gun ownership, not "control."  Everybody likes to use the word "control."  I don't want your guns.  You may keep it and put it in your safe and unload it and lock it up, that's what I want to happen.  People who go hunting, that's great, this is a great state for hunting -- go! -- but when you come home, unload your gun and lock it up.  If you have children who go play with the neighbors, I think it's a really good question to ask the family, "Oh, do you have weapons? Do you have guns in the house? And are they secured?"

(9:30):  I propose that students at all levels, people incarcerated, applicants for purchase of a gun, as well as every public employee and candidate for office be required to demonstrate their competency in conflict resolution. The educational resources for that skill could be offered in partnerships with non-profits, churches, and neighborhood associations. TV stations could be enlisted to air PSA’s and programming that supported conflict resolution skill-building. The funding for such a program would probably be a small fraction of all the violence-containment measures now being proposed.

Can you imagine how such a program would reduce the use of any weapon — including verbal abuse — to resolve conflict? The ratio of benefit-to-cost would be huge, and the NRA just might support it.

(24:15):  Whether you are a person who owns a gun or not, there are points of agreement we should all be able to have.  I truly believe that none of us wants to see another child die.  I truly believe that we all care about safe homes and a safe future for everyone, and so I think we share those values, and we need to do a better job of how we get there.

(33:25):  We've had speakers talking about personal responsibility.  We're all positive people, right?  We're in Eugene.  Eugene is a beautiful town and we have beautiful, positive people.  We don't want to think we live in violence, but we do.  The other night, there were gunshots near my home.  Why?  Why does anyone need to fire a gun?  There wasn't a report to the police.  What happened?

When we hear the stories on the news, every week there seems there's some shooting in our area, or some gun crime, or some felon [in possession], we shake our heads, and we say, "Ohh.  Not again."  Then we turn off the TV, go to sleep, wake up, and do life as usual.  We all have to be involved.  We all have to talk about it.  We all have to talk to our legislators and say, "We want something done, right now!"  Right?  Right.  Right now!  Not a year from now.  Not ten years from now -- as people continue to die.  It's not just a question of freedom.

The pro-gun folks talk about their rights -- and they do have rights.  To them, a gun represents a symbol of justice and freedom and the American way.  A "stand against tyranny."  But when you're looking down the wrong end of that gun, when you're holding a dead teen in your arms, as I have, when you're attending the funeral of a friend who's killed himself, that gun is no longer a symbol of freedom to you, it is exactly what it was designed to be:  a deadly weapon.

Unfortunately, we didn’t realize that the ELaw Conference was scheduled for the same day and time (oops), so many of the potential audience, "progressives" in Eugene, were there instead, so turnout at the rally was low.

Also, 5 or 6 pro-gun demonstrators showed up, waving signs that opposed the proposed Oregon assault weapons ban.  They were mostly respectful, though confrontational enough to hold video cameras in our faces and trying to ask personal questions.  Same ol', same ol'.

I'm looking forward to the next rally we can hold.
Posted by Baldr Odinson at 11:58 AM