My Son's School Went On Lockdown Twice In A Week

Twice in a week's time, my son's high school went into lockdown because of gun incidents.

As a parent, I found out the same way that most parents do when a gun incident happens at their kid's school:  I got a panicked text from my son:

It was 11:00 AM on Friday, 1/11. I texted back that I loved him and to be safe, then immediately stopped what I was doing at work to let my wife know and to consult the news.

What I soon learned was that the incident that precipitated the lockdown had been over for almost a half hour. Unable to get to his phone, my son had spent all that time laying on the floor in his teacher's office, the door barricaded and lights off, with other scared children, some crying, some frantically texting their parents, while they waited to find out what their fate was.

A particular signal had come over the intercom. It was brief "so it wouldn't alert the shooter," as my son explained. Then, as the teacher barricaded the door, turned off the light, and they all took cover, administrators put his high school, and two other schools next door, into lockdown.

HERE is the news story I first read. It explained that a man had gone to the middle school right next to my son's high school for a "custody dispute," that the man had been shot and killed by officers, and that no students were harmed. According to the official Eugene Police Department release:


"At 10:27 a.m. today, January 11, Eugene Police responded to a custodial dispute involving an adult male at Cascade Middle School, 1525 Echo Hollow Road," Eugene Police said. "As officers were escorting the male from the school, he produced a firearm and a struggle ensued. During the struggle the subject was shot by police and is now deceased. This occurred outside of the school."


The man who was shot was named Charlie Landeros, age 30. The shooting happened right outside the main doors to the middle school. From what I understand, the man's daughter witnessed the whole thing.

I was relieved to know that my son wasn't in danger. And the lockdown soon ended.  Meanwhile, concerned parents had shown up to take their children, having gotten the call about their kids and wondering how they would be traumatized, particularly the children at the middle school, some of whom heard the shots. One 11 year old boy described the fearful moments:


"I was getting out of second period and I was sitting on a bench and I got up to go to my locker to put my binder away to go to third period when I [heard] the announcement … and I ran to the library and went under the computer lab desks," he said. "I was kind of scared because some of the people that were with me also underneath the desk were talking about they actually did hear gunshots and were down where it all started.

"I wasn't thinking you know, about getting shot. I was just … thinking about my family and … that stuff because my tablet was in my locker and I couldn't text anyone and that kind of scared me a little.

"I was relieved because when I pulled up my messages there were a couple texts from my mom and she was asking if I was OK," Josiah said. "I'm feeling good safe since I'm finally out of school." 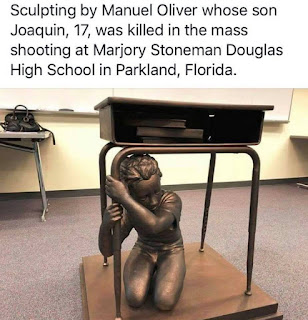 My son told me that when the lockdown was over, and he went into the corridors with the other students, there were "a lot of red faces" from people crying. He had trouble that night, needing some quiet time to reflect and a bit of extra attention, unable to watch shows that involved any tense situations, but otherwise handled it pretty well. But I'm certain there were many children far more disturbed by the event, particularly younger kids.

Thankfully, the schools reacted exactly as they had practiced.  I'm thankful the shooting happened outside the doors of the school, too.

The police haven't issued any further public report yet. Like most schools these days, who unfortunately have to prepare for this situation due to the increase in shootings at schools nationwide, there were cameras at the front door that almost certainly recorded the event.  The family of the shot man have demanded to view them. The Civil Liberties Defense Center, which released a statement and memorium for Landeros, suggested that the shooting was not justified (they refer to it as a "homicide") and suspecting racial bias, calling for a "transparent, unbiased and thorough" investigation.

But here's the crux of the problem: Landeros apparently showed up to the school with a concealed handgun. It is important to note that, in Oregon, it is not illegal to have a concealed handgun on the grounds of public schools if you have a conceal carry permit. The school board of a district can choose to disallow hidden guns of staff members and faculty, if they wish, but not for visiting parents. I don't know if Landeros had a permit. But this needs to change.  This case is a very good example why it's a bad idea. Landeros showed up to a dispute, likely in an anxious state of mind. I don't know why police were called, or why he was being escorted by police out of the building. Was it because they knew he had a gun? I don't know at this time. But it's a dangerous situation made potentially deadly by the presence of a loaded firearm -- and deadly it was.

Pro-gun nutcases like to spout that school shootings wouldn't happen if only citizens could arm themselves. But it is precisely BECAUSE a citizen was armed that the event happened in the first place.

Only three school days later, on Wednesday, 1/16, my son texted me again:

With no mention of guns this time, I was less worried. UNTIL I read a news article a few minutes later that stated:


"a report of a person, possibly a student, who might have had a handgun on campus"

My heart sank. Once again, students barricaded themselves in classrooms, this time for almost an hour, as police searched the grounds, with my son's high school on lockdown and three other middle and elementary schools on lockout (where the exterior doors are locked but students are not barricaded and hiding in rooms). A student had seen the person with a handgun "in his waistband" and notified school staff, who then initiated the lockdown. The person with the gun was never found. Was it a student? Was it another adult with dubious intent? Will they come back to the school, armed?


According to a Washington Post study released in December of last year, 4 million children (!) in America had to endure lockdowns in the 2017-2018 school year.  FOUR MILLION!  There was a time when children hid under desks in "duck and cover" drills, afraid of nuclear bombs from far away. But today, the threats are within our own communities.

More than 4.1 million students endured at least one lockdown in the 2017-2018 school year alone, according to a first-of-its-kind analysis by The Washington Post that included a review of 20,000 news stories and data from school districts in 31 of the country’s largest cities.

The number of students affected eclipsed the populations of Maine, Rhode Island, Delaware and Vermont combined. But the total figure is likely much higher because many school districts — including in Detroit and Chicago — do not track them and hundreds never make the news, particularly when they happen at urban schools attended primarily by children of color.

Still, on a typical day last school year, at least 16 campuses locked down, with nine related to gun violence or the threat of it. The Post’s final tally of lockdowns exceeded 6,200.

Jesus. If these horrifying statistics don't alarm us, what will?? School lockdown drills are now at least as common as fire drills. Sadly, our society is so overflowing with guns and violence, it has become necessary. There are even books you can buy for your children that try to lessen the trauma of lockdowns and lockdown drills, like "Lucy Practices a Lockdown" and "The Lockdown Drill."

But look at the cost to our children of all these lockdowns! From that same article:


The sudden order to hunker down can overwhelm students, who have wept and soiled themselves, written farewell messages to family members and wills explaining what should be done with their bicycles and PlayStations. The terror can feel especially acute right after school shootings like the one in Parkland, Fla., when kids are inundated with details from massacres that have taken the lives of students just like them.

Year after year, madmen and armed children go into schools and commit murder, suicide, and mass shootings, and still our national leaders have done nothing to change it other than to offer empty condolences.

Sure, we can turn our schools into armed fortresses, and every other public space, but is that really the kind of place we want for our children?  The only solution is to do more to keep guns out of the wrong hands and to fight the NRA's "guns everywhere" profiteering agenda.

It's time for change, for the sake of our children, to create a new trajectory for our communities.


UPDATE: HERE is a very good and detailed write-up on Charles Landeros and his motivations and pro-gun extremisim.
Posted by Baldr Odinson at 8:05 PM