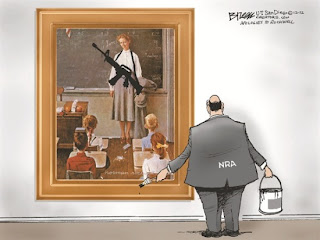 A little less than a week ago, the little town of Harrisburg, Oregon, just north of where I live in Eugene, held a meeting to discuss the idea of arming some of its school staff, following the lunatic advice of the NRA.

At the meeting, [state representative Dennis] Richardson said that upgrading fences and locking doors make schools feel like prisons, and that building prison-like schools are an ineffective deterrent to school shootings, as determined shooters will find access to a campus.

Linn County Sheriff Tim Mueller agreed and added that Sandy Hook Elementary was locked down and secured when the attack happened and that no matter what schools do, a shooter will gain access if desired.

(Maybe you remember Sheriff Tim Mueller?   He's one of the insurrectionist Sheriffs who, before President Obama had even unveiled his proposals to reduce gun violence, declared that he would rebel against his sworn duty to uphold and enforce the laws of our nations by refusing to enforce any gun legislation that was passed.  But I digress...)

We wouldn't want to add sensible security features like fences and locking doors.  Let's instead arm our teachers!  We don't pay them enough to actually teach our kids, with 30+ students per class, and expect them to sometimes parent our kids, too, and serve other roles, like street-crossing guards, coaches, or even bus drivers, for little-to-no additional pay, but now they are expected to be the school armed security, too?

What representative Richardson failed to acknowledge is that there isn't a single instance -- ever -- of an armed school security guard actually stopping a shooting by pulling out their weapon.  In fact, they have tried and failed.

Perhaps this is why teacher and parent organizations have roundly come out against the idea of guns in schools.  From one article:

The American Federation of Teachers called the suggestion "irresponsible and dangerous," while the National Education Association described it as shocking and based on the "delusional assumption that everything other than guns contributes to these tragedies."

The National Parent Teachers Organization said today it was pleased with many of President Obama’s new proposals to improve school security but that his call for more armed guards at schools “comes as a disappointment.”

But there HAVE been instances where conceal carry permit holders, including armed security guards, have had accidents at schools.  Consider the following SEVENTEEN examples in recent years:

There’s no clear evidence that having armed guards has reduced the violence rate.  The vast majority of schools have never demonstrated a need, nor likely ever will demonstrate a need, for armed interference.  One report for armed schools in Mississippi reported that the guards engaged in “overly harsh school disciplinary policies,” unnecessary arrests, and racial prejudice.  Further, two different studies (HERE and HERE) have shown that armed guards in schools make students feel less secure, possibly affecting their performance.

Conceal carry gun owners are all-too-often responsible for leaving loaded guns where children find them, sometimes resulting in injuries or death, unintentionally discharge their gun in public or leave it behind in public, or, yes, purposely use their guns to murder people.

And God forbid if a troubled child were able to get the gun off of the concealed carry permit holder to arm themselves.

Walking onto the grounds of a school won't magically change human nature, including for conceal carry permit holders.  It is an unacceptable risk to our children.


ADDENDUM (4/3/13):  A related and more updated posting at the Common Gunsense blog.

UPDATE (5/14/13):  Another shooting by a "law abiding" gun owner on a school campus, in Aurora, Colorado, unintentionally shooting a student in the leg.  From an article:


Police spokesman Ofc. Frank Fania says a staff worker at the school accidentally shot the student in the leg in the staff worker’s car. The student was getting a ride home.

The gun accidentally fired while the shooter was putting it away in the glove box of his vehicle.
Fania says the staff worker has a second job as an armed security officer, so it’s legal for him to have the gun. He is not a teacher at the school and his job as a security guard is not associated with Aurora Public Schools.

The worker drove the victim to Aurora Medical Center South for treatment. The victim is expected to recover.

UPDATE (8/12/13):  A reader alerted me to an update on Harrisburg, Oregon, school district. They are still considering arming staff, but naturally are facing big problems with insurance (as have other school districts who have attempted this).  When the local paper contacted the school board president for a statement on the issue, he told them, "Go to Hell."  Nice.

UPDATE (8/24/13):  A SWAT police officer was giving a presentation at an elementary school in Lodi, California, displaying "tactical equipment," when a 6-8 year old boy fired the officer's holstered gun, hitting the officer in the leg.  The boy was not identified.  The officer will recover.

UPDATE (10/24/13):  A police officer was visiting a Chino, California elementary school to take part in a school assembly. He left his loaded AR-15 assault rifle on his motorcycle. An elementary school child then pulled the trigger.  The bullet hit a metal plate, creating shrapnel that injured three children.

UPDATE (11/11/13): The shooting at a high school in Walsenburg, Colorado, was added to the list above.

UPDATE (9/11/14):  The unintentional self-shooting of a teacher in a school in Utah was added to the list above.  From another article on the incident:


"State law allows it, and the district has no authority to prevent concealed weapons permit holders access to our campuses," Horsley said. "Additionally, permit holders are not required to disclose their status as a permit holder, and/or whether they are carrying a weapon or not, to their employer, or in this case, the principal or school district."