Be Safe This Halloween

In Oregon, as in most states, a private gun sale requires no background check, paperwork, or questions asked at all (except at gun shows in Oregon).  That means ANYONE can purchase a gun:  it's just cash-and-carry, no "underground black market" needed.  And too many of those sales are to unstable individuals or criminals. 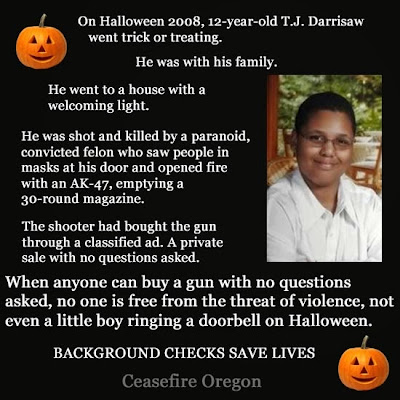 Be safe this Halloween, and demand background checks and other sensible gun regulation to make a new trajectory for our communities away from gun violence.
Posted by Baldr Odinson at 9:11 PM

More Pro-Gun Arming Of Schools Despite Objections From Teachers

Well, it's happened again.  Another school board with some pro-gun extremists sitting on it has declared that concealed handguns are allowed in its classrooms, including in the hands of its teachers.  This time in St. Helens, Oregon.  As usual, though, they have done so against the wishes of the very teachers they want to arm.

Back in March, 2013, a ban against guns was put in place in that school district after teachers and parents were polled.  The vast majority were against guns.  Wisely, the school board put the ban in place out of respect to the wishes of those they served.

Unfortunately, school boards are not necessarily made up of people who have children in their district or have any teaching experience at all.

From an article and news video which quotes one of the teachers in that school district:

A teacher at St. Helens High School says the school board ignored teachers’ opinions when they repealed a ban on teachers and staff members carrying concealed weapons on campus.

Amber Horn said the board knew how the teachers felt about the issue, but didn’t care.

Since the ban was put in effect, some new, more conservative school board members have come on the board and decided, on their own, that guns around kids in their school would be a great thing.

Board member Ray Biggs and chairman Marshall Porter, in particular, think teachers should be able to have guns in the event of a school shooting.

“I would say that the risk is more likely that somebody who isn’t following the law is a higher risk to your child coming on to school property than the one that is going to do it legally,” Porter said.

Really?  It would seem that Mr. Porter doesn't have his facts straight.  If he had bothered to look, he would have found that there has never been a school shooting stopped by an armed teacher or a citizen conceal-carry owner.  The closest case I ever found was of a school staff member (and Army reservist commander) who went out to their car and got a gun, but the shooting was over by that point, the shooter was out of ammo and was driving out of the parking lot (the only reason he was stopped was that the shooter crashed his car, allowing the staff member to get to him and hold him under arrest).

On the other hand, I know of at least SEVENTEEN instances where they have CAUSED incidents, including injuring themselves or children, just in the last couple years, including one by a police officer just the other day.  Here they are:
Totaled up, that's four children and four adults who have been wounded out of sixteen cases.

What's more, these extremist school districts are discovering that, upon making their ruling allowing guns on campus, their insurance companies are pulling their coverage or drastically increasing premiums.  You see, insurance companies actually pay attention to the facts and statistics.  They understand that guns and kids are a deadly mix.

Arming schools is an idea that is very unpopular with nearly every national organization representing parents, teachers, and law enforcement, as well as the citizens of Newtown, and has no merit with any historical context.  It’s time to listen to them and put this whole, dangerous nonsensical suggestion by the NRA to rest.  Support commonsense gun regulation to keep guns out of the hands of children and bad guys to begin with.


UPDATE (11/5/13):  A group of teachers, parents, and concerned citizens of St. Helens, Oregon, got together to hold a public protest of the school board decision.

UPDATE (9/11/14):  The unintentional self-shooting of a teacher in a school in Utah was added to the list above.

No Vacation For Shootings

I took a little vacation from volunteering, including from gun violence prevention activities like this blog (though I did continue to read and share on social media) as well as any other sort of community work I do.

Facing down the specter of gun violence, reading so many articles about shootings, learning about victims, and meeting survivors all takes a toll on a person.  Instead, for a month, I focused almost completely on my family.

A week of that time was spent in southern California, taking the kids to Disneyland and Legoland and visiting with family down there.  I was thankful for Disneyland's policy against concealed handguns by visitors.  Despite the fact that over 40,000 people (sometimes up to twice that number) visit the park each and every day I was there, there were (gasp!) no incidents where someone had to defend themselves with a firearm in this gun-free zone.  No gangs jumped out at me from behind the yeti on the Matterhorn roller coaster; no drug fiends tried to rape us on the Tea Cup ride; no mass shooters went on a spree as we sailed through It's A Small World.  The worst I saw were some stressed parents with over-stimulated, tantruming kids.  Safety in the "Happiest Place On Earth" doesn't need gun-toting people afraid of their fellow man.  Of course, some gun guys purposely disobey.  They just can't keep their paranoia at home.  If they would stupidly take them into airport security (as over 1500 did last year, with a disturbing rise so far this year), they would take them anywhere.  Legoland, too, doesn't allow firearms.  Nope, didn't see anyone needing one there, either.

I was also thankful that California has such strong gun laws.  As has been shown many times, there is a strong inverse correlation between the strictness of gun laws and the number of shootings.  California is one of the states with the tightest gun regulations, and not coincidentally, is among the top ten safest states for number of per capita shootings.  Gun laws matter!  And California has now passed additional laws requiring long-gun buyers to earn safety certificates, banned conversion kits that can turn regular magazines into high-capacity magazines, locked storage of guns in homes where felons and other prohibited people live, extension of prohibition for gun purchase from six months to five years by people deemed to be violent, and a ban on lead-containing ammunition.

Sadly, the rate of gun deaths in the United States never takes a vacation.  During my stay in California, a mentally ill man, Aaron Alexis, who had a history of problems and had recently been reported as hearing voices and thinking people were microwaving his brain, was nonetheless legally able to purchase a firearm and go on a shooting spree in the Washington Navy Yard, killing 12 and injuring 4 before he was killed by law enforcement.  Sane voices understood that this was yet another example of how guns get into the wrong hands, and that action needs to be taken to keep it from happening yet again and again and again.  The NRA's response, predictably, is that there should have been more people with more guns.  No surprise there.  Ignorant and dangerous, it ignores the fact that America, despite having the highest rate of gun ownership in the world, also has the highest rate of shootings of any nation not at war (see a graph HERE).  If the NRA's self-serving line were true, we would be the safest country, not the worst.  The facts and the deaths of innocents are inconvenient to the NRA line that more guns make us safer.

And as I tried to vacation and keep my thoughts positive, the shootings just kept coming and coming, of children and co-workers and family members.  Some were mass shootings of four or more people.  One of those was at a pick-up basketball game in Chicago, where 13 people were shot and injured, including a 3-year old and two teens.  But most shootings were single-victim shootings, of all ages, in small towns and large cities.  A great many of these shootings would be national headlines in other countries.  Here, in blood-drenched America, they were lucky to make the front page of their local paper, and most people have already forgotten the name of the Navy Yard shooter, and likely haven't even heard about that Chicago shooting.  The Joe Nocera Gun Report continued to report on many of these shootings as they happen, cramming them together as best they can, too many to go into depth on any of them.

And so, it's time to get back to the cause of protecting our communities in my own small way.  This month, in addition to returning to blogging, I am serving on a county firearms safety committee, organizing an annual United Way donation drive, and taking part in other activities to help my town be a safer and more caring place to live.  We all have to work together to create a new trajectory for our communities away from gun violence.