Oregon Firearms Federation (or "OFF", which bills themselves as "Oregon's only no-compromise gun lobby"), and their rabid executive director, Kevin Starrett, are no strangers to extremism.  They lie, distort, and belittle in order to try to get their way.  They are far worse than the NRA, and often accuse the NRA of being "too compromising."  Any time there is even a hint of gun violence prevention bills, OFF immediately jumps to extreme conclusions and mobilizes against those horrible liberals comin' to take their gunzzz (This is the same group that has tried to pass bills to allow felons to be armed, to allow convicted drug offenders to carry concealed guns, and even to force schools at all levels to have mandatory gun classes for kids, among other extremist positions, and they have gleefully burnt effigies of the governor on the capital steps, marched through the capitol building with assault rifles, and stood behind gun violence victims in legislative hearings while sporting loaded handguns in open intimidation of those brave presenters).

Lately, an Oregon politician named Val Hoyle has been in the running to fill a soon-to-be-vacated state senate seat.  In past years, Val Hoyle had gotten an A rating from OFF.  That is, until she dared to co-sponsor a bill for universal background checks (Oregon Senate Bill 941), at which point her A was turned to an F.  She understood that, according to four different polls of Oregonians, the bill was supported by the public to the tune of 79-90%!  The bill passed and was enacted in May of 2015.  The response from OFF and its followers was immediate and extreme.  They urged their followers to disobey the law (yes, as usual, the pro-gun movement is also pro-criminal).  They vengefully started a movement to try to recall Hoyle and three other Oregon politicians who had supported the bill, which failed miserably, and they also started a movement to get county commissioners to pass resolutions against the bill.

The county commission of Lane County, here where I live, and where Val Hoyle's house district was located, was one of those commissions that passed such a resolution (you can read it HERE).  In fact, they passed it AFTER the bill had been passed, which means that their statement that they would refuse to fund or enforce the law was a breach of their oath of office.  Four of the five members of that commission are very conservative Republicans (and it was those four who voted for the resolution).  Jay Bozievich signed the resolution on the commission's behalf.  Lane County residents were overwhelmingly FOR Senate Bill 941, so Mr. Bozievich was going against the wishes of his constituents.  Oh, how OFF crowed about that little victory (even though it did nothing to stop the law from being enacted)!

Well, there was a vote by the Lane County Commissioners this week, to decide if Hoyle would fill the Senate seat, or if it would be filled by another Democratic candidate named Jim Manning.  OFF lobbied hard to flood the commission's email with anti-Hoyle emails, with the usual name-calling (they called her a "Bloomberg stooge," "Bloomberg's handmaiden," "anti-gun zealot," and other names, in part because Michael Bloomberg had given her a campaign donation).  In the end, Manning was voted into the position instead of Hoyle (the vote was 3-2 for Manning), so OFF celebrated and claimed the victory as their own.  Jay Bozievich was one of the two votes for Hoyle.  According to an article, very few of the deluge of emails from the gun guys were from constituents who actually lived in Hoyle's district, and the emails didn't affect the commissioner's decisions.

But, as usual, the extremist comments from OFF and its supporter soured their own reputation with the politicians they inundated. 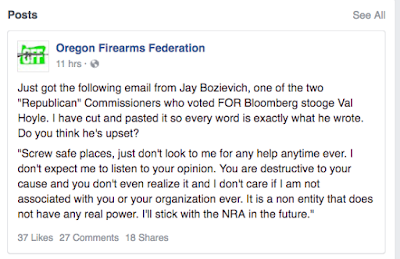 The reason I'm laughing is because OFF posted a statement from Jay Bozievich on their Facebook page, in response to the recent vote against Hoyle.  See a screenpic of that posting, to the right.

That's right:  the very Republican far-right commissioner, who signed a resolution against background checks on their behalf, is sick of OFF's extremism and has let them know, in no uncertain terms, that they are a "non entity that does not have any real power."

Bozievich was correct.  OFF is destructive to their own cause.  Every time they send out their email alerts or open their mouths in hearings, OFF proudly displays their extremism for all to see.