Gun Sales Boom, But Who's Buying? 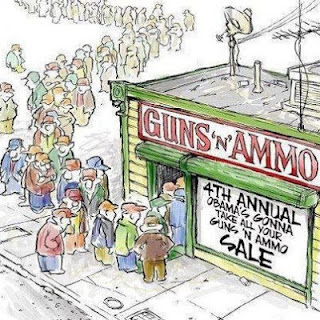 With headlines like that, it makes it sound like everyone and their brother are running out to be first-time gun buyers.  Why, the percent of the population who own guns must be skyrocketing!

Particularly, sales are souring for assault weapons, which face a potential ban.  From one article:

“If I had 1,000 AR-15s I could sell them in a week,” said Jack Smith, an independent gun dealer in Des Moines, referring to the popular style of semiautomatic rifle that drew national attention after Adam Lanza used one to kill 20 children and 6 adults at a Newtown school. “When I close, they beat on the glass to be let in,” Mr. Smith said of his customers. “They’ll wave money at me.”

This was the highest monthly percentage rise ever reported for a measurement commonly used to gauge the firearm industry's performance. It eclipsed the 30.8 percent rise of November 2012.

These reports of surging gun sales are based only on the FBI reports of background check numbers.  Everyone who buys a gun from a licensed dealer (not a private seller, mind you!) has to have a background check with every sale.  So, yes, sales have soared, but they can't discriminate between first-time buyers and gun nuts with 100 weapons stockpiled in their basement.

Those of us who keep track know better.  These aren't first-time buyers.  These are primarily people who already own guns who are buying into the NRA propaganda that Obama's comin' for your gunzzz.

The truth is almost certainly that the sales are predominantly to prior owners.

Evidence:  Sales of guns have been steadily declining for decades, across a wide swath of different demographics.  As reported in the New York Times (also see graph, at right):

The gun ownership rate has fallen across a broad cross section of households since the early 1970s, according to data from the General Social Survey, a public opinion survey conducted every two years that asks a sample of American adults if they have guns at home, among other questions.

The rate has dropped in cities large and small, in suburbs and rural areas and in all regions of the country. It has fallen among households with children, and among those without. It has declined for households that say they are very happy, and for those that say they are not. It is down among churchgoers and those who never sit in pews.

I'm not alone in my feeling about who is buying these guns, by any means.  One who agrees is Daniel Webster, who has studied and published studies on the issue of gun violence for a very long time.  From that same NYT article:

“There are all these claims that gun ownership is going through the roof,” said Daniel Webster, the director of theJohns Hopkins Center for Gun Policy and Research. “But I suspect the increase in gun sales has been limited mostly to current gun owners. The most reputable surveys show a decline over time in the share of households with guns.”

Of course, the NRA refutes this theory.  It doesn't help sell guns to point out that their popularity is declining.  But every other entity who has polled the public on the issue or studied it in any way has found a comparable trend.

Suggested reasons for the decline?  A steady decline in hunting, more urbanization of the population, changing demographics, and generally lower rate of violent crimes in most areas.  The decline is also age-related, with younger people declining in ownership faster.

So to all you gun nuts out there who buy into the NRA propaganda and are stocking up your arsenal:  you are increasingly fringe in your fetish.  Buying up all the guns you can handle succeeds in only one thing: emptying your pocketbooks and proving that you are paranoid.
Posted by Baldr Odinson at 12:13 AM