If Only He'd Had A Gun To Defend Himself. Oh, Wait.... (Open Carry Samaritan)

Jason Erik Washington was on the campus of Portland State University when he witnessed an argument between two men, one of whom used a racial slur. The men began to fight each other.

That's when, armed with his openly-carried handgun and a valid conceal carry permit, he leaped into the fight to try to break it up.

Meanwhile, two armed university police officers were already arriving to do the same thing. Washington continued to try to break up the fighters even as the police were attempting to do so.

A witness took a video of the incident. Here's a screenshot from that video where I highlighted the gun hanging off his hip, at 18 seconds into it: 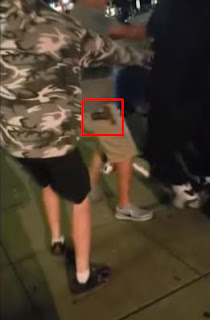 Video footage shows what appears to be a black object attached to Washington’s right side as he’s seen pulling one man off another. Two PSU police officers can also be seen.

“The gun slipped out of the holster when he had fallen, and I think he may have tried to retrieve it,” Smith said. “Then they said ‘gun.’”

That’s when police fired, she said.

Watch the video and judge for yourself. You can hear the police telling him to drop his gun. And, one witness....


....recalled the man reaching for his gun after police told him three or four times not to.

"They warned him multiple times not to reach for it, but he did," Dietz said. "I don't want the message out there that the cops were trigger-happy." Dietz said employees at the Cheerful Tortoise did everything they could to stop the situation from escalating like it did.  "It's just that people got drunk and stubborn," he added.  "They had to do it," he said of the officers involved. "People think they were overzealous, but they had to do it."

One friend of his, named Joseph, had this to say:


"I saw the video, and there is no way he should have been shot," Joseph said. "I wish he didn't have a gun on him, because this probably wouldn't have happened if he didn't."

According to an article:


Washington was a Navy veteran and an employee with the United States Postal Service since 1998. He worked with the collections unit as a letter carrier at the main office in downtown Portland, where he also served as the union shop steward.

Washington was married with three kids and one grandchild.

And now those kids, wife, and grandchild have lost him in their lives, because he chose to arm himself, and because those police reacted the way they did.  This is also an example of how being a military veteran doesn't automatically make you more responsible with your guns.

PSU voted to arm its police force in 2015, despite opposition from students.


[this post is part of an ongoing series of people being shot to death despite being armed (and sometimes because they are armed)]
.
Posted by Baldr Odinson at 2:37 PM