If Only They'd Had Guns To Defend Themselves. Oh, Wait... (Charlie Hebdo re-enactment)

Anytime there's a high-profile shooting in the news, the pro-gun crowd are quick to regurgitate the old myth that if only there were armed civilians carrying concealed handguns, the shooter would have been killed and the tragedy would never have happened.  Valiant vigilante heroes would save the day!

Sadly, this simply isn't the case, as I've blogged on several cases now.  And now a pro-gun group in Texas unintentionally proved my point.

On January 7, radical Islamic terrorists attacked the offices of the satirical French magazine Charlie Hebdo, which is known in part for publishing images of Mohammed.  The shooting in the office and in the streets outside killed 12 people and wounded 11 more.  A branch of Al Qaeda has claimed responsibility.  A manhunt ensued after the initial shooting, culminating in a further shooting at a Jewish Kosher market, bringing the number of dead and injured up to 17 dead and 22 injured.  Click HERE for a timeline and relevant article on the incidents.

The world reacted with shock.  There were rallies to condemn the attack, with world leaders marching arm-in-arm with 3.7 million people in Paris and elsewhere in France.  And a "#JeSuisCharlie" movement began, starting on social media. 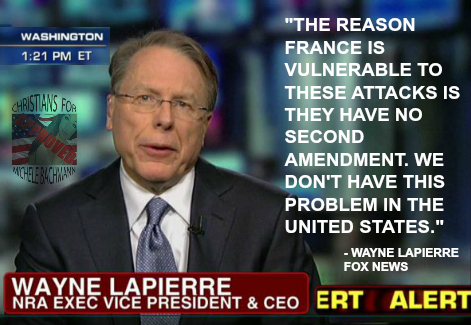 But what did the pro-gun pundits do?  Naturally, they dragged out the old argument that, in the words of NRA leader Wayne LaPierre, "The only thing that stops a bad guy with a gun is a good guy with a gun," arguing that if only some of those French people had been armed with concealed guns, those heavily armed terrorists with full-auto AK-47s would have been stopped and the whole sordid affair never would have happened!

Naturally, FOX News and their talk shows led the way, setting a tone for the pro-gun folks to parrot, including an appearance by Wayne LaPierre who bizarrely thinks that "we don't have this problem [of mass shootings] in the United States" simply because we have the Second Amendment.  Never mind that mass shootings happen in the U.S. every single week (in fact, I saw another one as I was writing this post -- a murder/suicide at a restaurant in Florida -- and a plot to attack the U.S. Capitol with guns and bombs was stopped today) and are practically unheard of France (or nearly any other industrialized country) and that the rate of mass shootings in America has tripled since 2011!

From a Media Matters article:


On the January 7 edition of Fox & Friends, Fox News national security analyst KT McFarland said that one thing that stood out to her about the attack is "that in France they have a very strict gun control policy." Later on Fox's The Five, host Greg Gutfeld said the victims of the attack were "sitting ducks" because the country "has the most powerful gun control in the world, and nobody's armed." On Fox Business Network, Fox's senior judicial analyst Andrew Napolitano said, "One of the reasons these people are dead is because they were sitting ducks. One of the reasons they're sitting ducks is you can't carry a gun in Paris. This would not happen in New York City." On Twitter, frequent Fox guest Donald Trump wrote that the attack occurred "in one of the toughest gun control countries in the world."

And another FOX reporter, Emily Miller, repeated the same refrain:

During the January 11 edition of Fox & Friends Sunday, Miller (the former senior opinion editor of the conservative Washington Times who also contributes columns to FoxNews.com) claimed the reason "terrorists don't come here is because of civilian's ownership" of firearms. Miller continued with the confounding argument that terrorists use bombs but not guns in the United States because of civilian gun ownership.

During a January 12 appearance on Fox & Friends, Miller added, "The Second Amendment is what keeps us safer from terrorist attacks because foreigners know we have guns." (Al Qaeda has actually encouraged its followers to exploit loose gun laws in the United States to get weapons without a background check.)

Well, a pro-gun group called "The Truth About Guns" decided to test this scenario.  They recreated a
mock-up of the Charlie Hebdo offices and took turns playing the two shooters and the office staff, armed with paintball gun versions of the firearms, except that they armed members of the office staff with concealed handguns.  Apparently, they wanted to demonstrate what all those FOX pundits were claiming.

But, try as they might, over and over (12 times, in fact), the result was always the same:  NO lives were saved.

Another volunteer, Parks Matthew, said he “still got killed, but did better than I thought I would.”

Hmmm.   Funny, that.  That might explain why no mass shooting in America has ever been stopped by an armed citizen who wasn't law enforcement or security.

But the pro-gun guys wouldn't let a little thing like statistics or failed mass shooting recreations stop them from trying to play the action-movie hero.  From the article about the Charlie Hebdo recreation:


Another volunteer, Parks Matthew, said he “still got killed, but did better than I thought I would.”

His “death” would not, however, deter him from acting in a situation with an actual hostile shooter. “If I’m in a movie theater and someone pulls a gun, what am I going to do?” he asked.

“I know now I’m not gonna just fall on my kids and protect them, I need to advance on the threat.”

I hope he never finds out.  Chances are, he would die in real life, too.

Hey, here's an idea to keep us safe...  Keep the terrorists from getting guns in the first place!  Oh, um, I guess the conservatives stopped that effort despite Al Qaeda calling for their followers to purchase guns without background checks at gun shows and private sales.  We wouldn't want to squash those vigilante pro-gun daydreams, would we?
Posted by Baldr Odinson at 12:43 AM