HERE is a link to the YouTube video, where you can also find links to purchase the song and contact information for the singer, Nichole Nordeman.

Arm Teachers In Florida? Parkland School Board Says No. One Teacher Disagreed - And Had A Gun Accident

After the Parkland shooting, there was tremendous pressure on the Florida Governor Rick Scott to take action.  He signed into law a bill called the "Marjory Stoneman Douglas High School Public Safety Act" which raised the age to buy all firearms to 21, imposed a three-day waiting period for most gun purchases, provides new mental health programs for schools, and restricted access to guns from people who show signs of mental illness or violence. 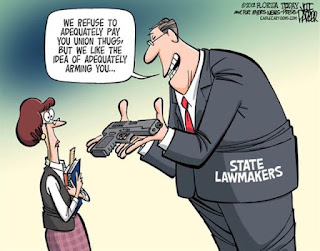 But, in a nod to the NRA and President Trump's call to arm teachers, the act also now allows Florida schools to choose to arm their teachers and staff.  It's a provision that is vocally opposed by teaching organizations, child advocacy groups, Florida school students, and even the families of school shooting victims.

Nevermind that no school shooting was ever stopped by an armed civilian who wasn't law enforcement. And, as I've pointed out in a prior post, at least 23 incidents have been CAUSED on school grounds by armed individuals, including guards, who were supposed to be the sort the NRA claims will protect our children.

“I have not met one teacher or one student who is in favor of arming teachers in Broward County,” board member Laurie Levinson said.

The school board instead wants the allotted money from the bill to go toward armed school resource officers, CBS Miami reported.

“We should definitely launch a campaign to persuade the governor, for those districts who do not want to arm their employees, that they give us the money to keep kids safe in other ways,” board member Robin Bartleman said.

(And they aren't the only Florida school board to reject the notion).

Well, actually, there was one teacher at Marjory Stoneman Douglas High School who was open to the idea of packing heat on campus.  Science teacher Sean Simpson supported his students in their calls to bring tighter gun regulations, but he also stated about arming teachers:

"I know there are some of us that are willing to take the training if it was offered and probably be another line of defense."

He was on campus when the shots rang out and the shooter killed 17 and injured 15. So why aren't the gun nuts trumpeting his assertion to arm himself on campus?  Probably because he promptly had an accident with his loaded gun:

[Simpson] told deputies he accidentally left the gun in a stall at the bathroom at the Deerfield Beach Pier during a visit to the beach Sunday. While going back to retrieve it, he heard a gunshot and once back inside the bathroom, saw 69-year-old Joseph Spataro holding the gun.

He left his loaded gun unattended in a public bathroom and a homeless man found it and fired it "to see if it was loaded." Luckily no one was injured. Oopsie! So much for that NRA poster child!  According to responding deputies:

Both Simpson and the homeless person are facing charges, but so far Simpson hasn't lost his job as a teacher.  I can only wonder what his students are thinking of him as they deal with their shooting-induced PTSD.  At least they can rest assured that neither he nor any of the other teachers will be allowed to carry on campus!

Pro-gun extremists like to argue that assault rifles, like the AR-15, are "modern sport rifles" that are perfect for hunting (like THIS SITE, which adds "It's even fun for kids"). Well, anything that throws a projectile can be used to hunt, technically.

I don't hunt, but all the serious hunters I know scoff at the stupid and transparent attempt to rebrand these weapons, and many hate them with a passion. I've posted before on the growing movement of hunters against the NRA. But with the number of hunters decreasing every year, and the rising cost of hunting as a hobby, the gun lobby wants to try to tap a new generation in any way it can. Why not increase your firepower?  Why kill one deer when you can take out the whole herd with one ammo magazine?  How much firepower is too much?

Well, leave it to Peter Sellers and Ringo Starr to point out the ridiculous nature of this position, in this excerpt from the movie "The Magic Christian" from 1969....

The Far-Right Continues To Attack The Parkland Teen Survivors

Today it was reported that an entire website has been started with the express purpose of trolling and hating a teenage shooting survivor who has dared to call for more gun regulation. It is only the latest of a long list of such attacks by Conservatives and pro-gun forces against him and the other teens who survived the Parkland shooting....

If a person survives a plane crash, then publicly calls for better air safety, do people attack their character? What about if their child dies in a building fire and they advocate for better building codes? Or their friend dies in a multi-car crash so they call for better speed enforcement?  What is the response from lawmakers and pundits?  Usually it is very understanding.

Are any of these survivors lambasted as "soulless liars"? Or compared to Hitler? Or told that they should be learning first aid instead of talking out? Or pronounced that they should have been smacked more as children? What sort of person says such awful things to victims, survivors, or their families?

And what if they are saying these things about child survivors who saw dozens of their friends killed and injured, and had to run past their bodies to escape? 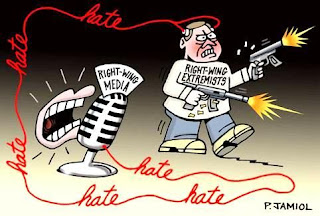 Yet I see this all the time when the issue is gun violence-related. Survivors and victims are ignored by the Conservative gun-loving crowd ... until they call for sensible regulation to keep the shootings from happening again.  And then the gun crowd comes out shooting, so to speak, attacking the character of those survivors who dare to speak out.  The right-wing hate machine starts up.  It happened to my friend Colin Goddard after he survived the Virginia Tech shooting and advocated for stronger laws.  It happened to Lucy McBath after her 17 year old son, Jordan Davis, was shot to death and she called for justice and change. It happened to David Wheeler, who lost his 6 year old son in the Sandy Hook shooting and testified for change. And so on....  Anyone who speaks out about gun violence and calls for change is immediately trolled, smeared, and threatened. It's even happened to me.

Sadly, we are seeing it again.  This time, they have come out to troll and hate on the survivors of the shooting at Marjory Stoneman Douglas High School in Parkland, Florida.  The fact that these are children makes the attacks even more pitiful.

These teen survivors are brave, well-spoken, and passionate, and we need to respect them, not tear them down.

There have been so many attacks on these teens by the far right that I've started to lose track. So I decided to make a sort of laundry list of them, here, though it is by no means complete (for instance, I didn't bother going to all the pro-gun blogs to see their reactions) and is just a sampling.  Read them and tell me if this is a sign of an intelligent reaction. When the facts don't support the extremists, they resort to name-calling, conspiracy theory, and outright hate speech.

How have the teens handled it?  Far better than many adults would. In fact, I'm impressed how they cope with the constant attacks and remain focused on the need for change.  In the words of teen survivor David Hogg, when asked what he thought of the attacks on his character and the conspiracy theories:

“I don’t care,” Hogg said. “I don’t. I have bigger, more important things to focus on than these stupid conspiracies that aren’t true in any way, shape or form, have no validity, and don’t hold their weight. At all … these people are going to keep trying to take us down but that’s how we know what we’re doing matters … whenever someone tries making a change that matters, and a change for the better, there’s always someone that tried stopping them.”


And the teens have been wildly successful in their effort: The nation's largest-ever one-day march and rally; State legislation pushed forward; Conversations on gun violence in nearly every living room. Their passion, honesty, and progressive attitude is very much at the heart of it all.

Here's the list I have so far (which I will update when I find more), more or less in chronological order, of some of the major attacks on the Parkland teens. As you can see, a great many of them target Emma Gonzales and David Hogg, the two most outspoken teens:

This sort of hatred, trolling, and conspiracy theorizing isn't just rude and disgusting, it's dangerous. Weak-minded (and armed) people who listen to this may believe it and act out violently as a result. It's happened plenty of times before (remember the "Pizzagate" shooting?).

I think you can see how toxic these extremist Conservatives are to their own cause.  I applaud the Parkland teens for their courage, and thank them for trying to make a new trajectory for our communities and nation away from gun violence.

Posted by Baldr Odinson at 8:00 AM