You're Probably A Pro-Gun Extremist If .... 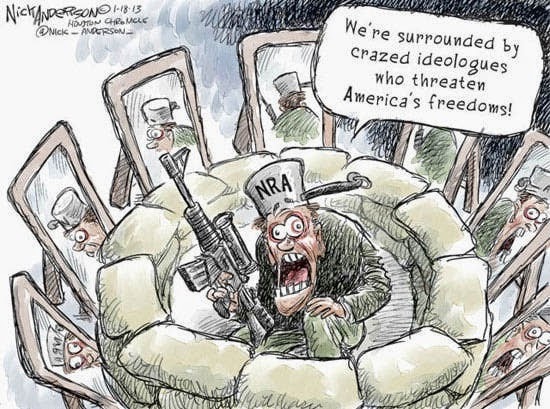 Pro-gun extremists who occasionally leave comments on this site don't seem to realize how "fringe" they are.  They think they are in the majority, despite all the polls that suggest otherwise.

Fellas, the first step in overcoming a problem is to realize you have a problem in the first place.  So, in the interest of helping you extremists out there realize you may need counseling, I've compiled a little list for you.  If you recognize yourself in there, you might want to put down the AR-15 you're cleaning and call a good therapist.

YOU'RE PROBABLY A PRO-GUN EXTREMIST IF....

1) you think the Second Amendment was written so you could forcefully overthrow your government if you personally disagree with it.

2) you gave a pink handgun to your pre-teen daughter for her birthday.

3) you think it's perfectly reasonable for civilians to own a .50 caliber sniper rifle.

4) you think a 5-minute background check is an infringement of your rights.

5) you argue that an assault rifle is indistinguishable from a hunting rifle used to shoot deer or elk.

6) you think firearms training should be a required class in grade schools.

7) you call anyone who disagrees with you  a "gungrabber," "anti-gun cultist," or "hoplophobe."

8) you argue that a silencer is only useful to protect your hearing, and couldn't possibly be used by criminals to reduce the chance of detection in a shooting.

9) you think children under 18 should have unsupervised access to a handgun "for their protection."

10) you think gun violence statistics shouldn't count accidental shootings, shootings by law enforcement, defensive shootings, gun-related suicides, or pretty much any shooting outside of those that involve gangs or drug dealers.

11) you think a citizen's paramilitary militia should be funded by your state in order to "help law enforcement."

12) you see no problem with allowing people on the terrorist watch list to purchase guns.

13) you accuse any article published in distinguished medical journals as being "biased" if it casts a negative light on firearms, no matter how respected and peer-reviewed the journal may be.

14) you have prepared to resist a home invasion by jackbooted government agents coming to take your guns.

15) you label gun control advocates as "pro-criminal" even though you oppose any measure to prevent guns getting into criminal hands.

16) you openly carry assault rifles into restaurants, parks, and stores to "normalize" the sight of guns to the public