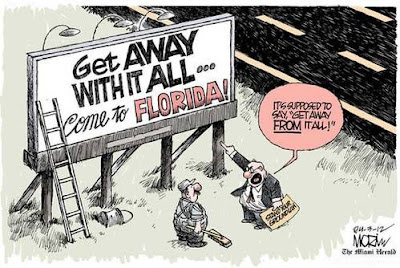 I’m mildly entertained by the massive FAIL that defines the ongoing, and still prison-free (for now), life of George Zimmerman, the man who stalked and shot to death unarmed teen Trayvon Martin.  It’s the same sort of mild entertainment I feel when I can’t help but watch idiots on those home-video TV shows who jump off of roofs onto trampolines and wind up racking themselves on their kids’ bike.

Since being acquitted of Trayvon’s murder, George can’t seem to stay out of trouble.  Shocking, since he’s such an upstanding, law-abiding citizen who was only defending himself, so says his gun nut supporters who continue to send him money for his defense, numerous times (examples HERE, HERE, HERE, and HERE).

Oops, but he’s been mis-spending that money.  Turns out he didn’t actually use it for his defense, and hasn’t paid his attorneys.  Instead, he’s mainly using it on his personal expenses.  So much so, in fact, that his lawyer, Mark O’Mara, has demanded he pay up, and has stopped representing him.  From the article:

It appears that George Zimmerman may have conned the cons. After his recent altercation with his wife, his attorney, Mark O’Mara told ABC News in a September 10th  interview that he would no longer be representing Zimmerman.

During the ABC interview, when O’Mara was asked if he had any advice for his former client, he said this:

Wait, Zimmerman never paid his defense attorney? What happened to all of the money he raised for his “legal defense fund?” It’s interesting, actually. If you visit Zimmerman’s Legal Defense fund web-site you can get a pretty good idea where the majority of the money was spent.

Leaving that page, and moving to one titled “Moving Forward” which addresses how future donations will be spent, it gets even more interesting. The predicted future expenses include the Zimmerman’s living expenses and private security as the first two items on the page. A bit further down the page, under the heading “Case Related Expenses” it clearly says “Mr. O’Mara and Mr. West have not been paid for their services. Money has been used to pay rent on office space, for IT support, for staff dedicated to the case.”

So by his own admission Zimmerman did not use the Legal Defense Fund donations to pay his attorneys. He spent the majority of the money on living expenses for himself and his wife, who was just paid more than $4,000 for one months living expenses out of the defense fund money. Wow.

Wow is right. But should anyone really be surprised that he’s conning the gun guys out of their money?  After all, he and his wife plotted to hide their money from the judge to the tune of $85,500, for which his wife, Shellie, was convicted of perjury.

And he has the gall to demand that the State of Florida pays his legal fees!

But even if he had paid his attorney, who can blame O’Mara for dumping George?  Zimmerman just keeps screwing up and acting irresponsibly!


That’s right, George got into a fight with his wife when, once again, she tried to leave him.  Then she called 911, saying that he was threatening her with a gun:

On the 911 call, Shellie Zimmerman is sobbing and repeating "Oh my God" as she talks to a police dispatcher. She yells at her father to get inside the house, saying Zimmerman may start shooting at them.

"He's threatening all of us with a firearm ... He punched my dad in the nose," Shellie Zimmerman said on the call. "I don't know what he's capable of. I'm really scared."

She also said he grabbed an iPad from her hand and smashed it.

She’s also quoted as saying on the 911 call, “I don’t know what he’s capable of. I’m really, really scared.”

But then, abruptly, Shellie changed her story, saying that no firearm was involved, and both she and her father, who was also attacked, refused to press charges.  It’s not unusual for women in domestic assaults to change their story, out of fear of the abuser.  That’s why police can still investigate the alleged abuser even if charges aren’t pressed by the spouse.  Now the police are trying to piece together footage from the damaged iPad, to see what the truth is, but the task may take months and may not work at all.

Perhaps George can claim he was just standing his ground?  Worked once before....

This recent violent behavior of George’s, too, isn’t shocking, given that George already has a history of domestic violence, not to mention other violent behavior and even allegations of child abuse!

The police chief of the town where Zimmerman now resides considers George a “ticking time bomb” and another “Sandy Hook” waiting to happen!

But even beyond George’s bad behavior, questions continue to arise about Trayvon’s killing.  The medical examiner in the Trayvon Martin shooting case, Dr. Shiping Bao, has recently come out with some bombshell information that he says was squelched by the police at the time of the trial who were biased against the victim, and told Bao to “shut up” about the facts in the case.  Bao, who was fired from the job over this issue, is suing the state of Florida over it, as a matter of fact.

What facts were covered up?  According to Bao, Trayvon was actually shot in the back, so there’s no way he could have been on top of Zimmerman.  Also, the amount of marijuana in Trayvon at the time of the shooting was too little to have led to any change in his behavior.  These facts came to light between the time Bao made his initial investigation of Trayvon and the time he was actually on the stand testifying.  This, among the many other ways that prosecutors threw the case.

Is Dr. Bao lying because he lost his job?  Or did he lose his job because the prosecutors didn’t like what he had to say, as he claims?  Time will tell, but I’m guessing Bao has evidence to back up his claims.


I have a feeling we haven’t heard the last of Zimmerman’s screw ups.  Eventually, he and his guns will be involved in yet another scandal.


UPDATE (9/14/13):  The Zimmermans claimed during the trial that they were living like "Gypsies" in a trailer.  Turns out it was a lie.  They were actually living in a two story, $240,000 home with a pool and spa, thanks to the generous donations given to them for their "legal defense" by the gun nuts.  From an article:


Shellie Zimmerman recently recalled living like gypsies during her husband’s trial for the shooting death of 17 year-old Trayvon Martin. According to GPS records at the Seminole County Sheriff’s Office, the couple moved for the last time into a two-story $240,000 home on a landscaped cul-de-sac — wait there’s more — with a 2-tier pool and spa with four water jets shaped like lions’ heads in the backyard. A patio sits in backyard with a second-story deck. The Zimmermans had 2,500 square feet of living space to stretch their legs.  ....

The Orlando Sentinel reports, “The house where George and Shellie Zimmerman lived during his trial – and for nearly a year leading up to it – was no trailer in the woods.”
If it is, I want to live in a trailer too.

The house is not even 10 minutes from the Seminole County criminal courthouse where Zimmerman stood trial.

In an interview with ABC News two weeks ago, Shellie Zimmerman said, “We lived in a 20-foot trailer in the woods.”

But that was for a short period of time, according to the Orlando Sentinel.

The home is reportedly owned by Shellie Zimmerman’s parents and it’s the same house where police took George Zimmerman into custody Monday after Ms. Zimmerman called police saying her estranged husband had threatened her and her father with a gun.

UPDATE (Breaking!) (11/18/13): Yep, Zimmerman has been arrested AGAIN, this time for allegedly assaulting his pregnant girlfriend and possibly threatening her with his shotgun.  Didn't I say this would happen??  From an article:


Victim, identified as Samantha Scheibe, indicated she and Zimmerman were having a verbal dispute where she alleged he broke a table before pointing a shotgun at her. Zimmerman was unarmed when police arrived.  However, he had barricaded the door and the police had to move furniture out of the way to get to Zimmerman.  Ms. Scheibe told police that she was “in fear of her life.”  The investigators are still meeting with her to get more information about the incident, while they obtain a search warrant to locate the shotgun.  There might be another gun in the house, according to the police.

Zimmerman was arrested and booked at 1pm EST, charged with aggravated assault, battery domestic violence, and criminal mischief. There is no bond set until he sees the judge tomorrow morning.  The aggravated assault charge with a firearm is a felony punishable up to 5 years in prison. If gun is used there is a 3 years minimum mandatory.