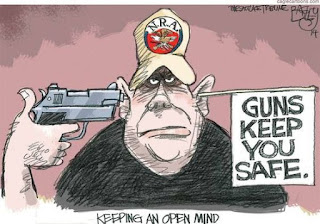 I've blogged on other examples in the past.  Things haven't changed.  Here are just a few examples I've collected in just the last couple weeks:

These incidents are the result of allowing anyone to purchase and own a gun with no training whatsoever, including training on the appropriateness of a situation or the heavy responsibilities of gun ownership, and no regard whatsoever for the temperament of the buyer.  As a result, simple disputes over trivial reasons turn deadly.

--> Cutting in line for the taco truck in Texas:  39-year-old Rigoberto Jose Castillo was standing in line at a taco truck at 2AM when a group of people cut in line.  A fist fight erupted.  That's when one of the group, went to his vehicle, retrieved a loaded handgun, and fired into the line, killing Castillo.  He then tried to shoot a witness, but the gun jammed.  Then he fled the scene.