The last four days have been sickening.  Once again, a young loner with a history of deviant behavior came, heavily armed with handguns and an assault rifle, to a public place, and committed yet another heinous mass murder.

This time, as most of our nation knows by now, it was only an hour's drive south of where I live, at Umpqua Community College in Roseburg, Oregon.  It feels like it was next door.

The shooter entered a classroom and opened fire.  When the smoke cleared, nine people were dead and nine were injured.  The shooter, too, was dead, after having a shootout with sheriff's deputies and then killed himself.

Here is an article with a short biography and photo of each of the victims who died in the shooting:
http://koin.com/2015/10/02/umpqua-community-college-victims-identified/

What followed was a flurry of activity, repeated every time we have a mass shooting (which is more than once a day in America now -- yes, you read that correctly!).  There was initial shock, followed by varying news reports and chaotic flood of information -- some incorrect. Then there was outrage from the community and those of us who fight gun violence.  Next came the slow release of factual information, and statements from politicians.  This time some called for change, like President Obama.  Each mass shooting brings more public voices like his.  This was the 15th time he has had to come on to national TV and address another mass shooting.

And then came the usual parade of pro-gun comments about how the faculty and students should have armed themselves, and fluttering about "gun free zones."

Well, it turns out that there was at least one student who had a concealed handgun and permit, a vet named John Parker, Jr.  After considering whether to engage the shooter with others who may have been armed as well, he decided it would be wisest not to, for fear the deputies would mistake him for the shooter.  See a news interview with him, HERE.  I don't approve of having guns on campus other than in the hands of well-trained law enforcement or security, but he was in his state rights to do so.  I'm glad he chose not to play a vigilante hero and get himself killed.

And, surprise, Umpqua Community College wasn't a "gun free zone," either!  Umpqua Community College has a policy that firearms and ammo are forbidden unless expressly authorized by law, which would allow conceal carry with a valid permit since state law allows conceal carry on state campuses unless the institution disallows that, too (such as the University of Oregon, which can prohibit them in buildings or possessed by students, staff, faculty, or game ticket purchasers).

It should also be pointed out that the pro-gun myth that gunmen target places specifically because they are "gun free zones" has been debunked many times.  From a Mother Jones article:


Among the 62 mass shootings over the last 30 years that we studied, not a single case includes evidence that the killer chose to target a place because it banned guns. To the contrary, in many of the cases there was clearly another motive for the choice of location. ...

No less a fantasy is the idea that gun-free zones prevent armed civilians from saving the day. Not one of the 62 mass shootings we documented was stopped this way. 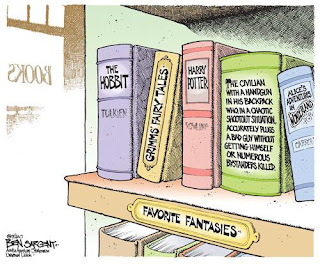 A number of things kept the massacre from being worse: deputies arrived within just six minutes of the first 911 calls to shoot out with the shooter; the school had practiced active-shooter emergency response just a week before; faculty followed the rules and locked doors and took shelter; and a real hero stepped in to confront the shooter.  Chris Mintz was shot multiple times, but he will survive, and he bought a lot of time for others to escape and for law enforcement to arrive.

But having a student with a gun didn't solve any problems in this shooting.  Having a conceal carry vigilante shoot it out with the assailant very well might have led to bystanders getting killed or confusion by law enforcement.  Remember, in Oregon there's no requirement to even fire or own a gun in order to get a conceal carry permit, much less get training in how to remain calm in a shootout, negotiation skills, or a thorough understanding of the law -- unlike police.

But the gun lobby, gun sellers, and their minions are happy to keep feeding us the myths of the conceal carry hero and "gun free zones" to stoke the fears of those who care more about emotional responses than the facts.