In May of this year, after at least a couple years of work by concerned legislators, gun violence prevention organizations, public health organizations, faith organizations, and members of the public, the Governor signed into law Senate Bill 941, providing for background checks for nearly every gun sale in the state of Oregon, including private sales.  It was a tremendous victory for public safety, and one that had the support of up to 90% of my fellow Oregonians.  The bill went into full effect on August 9. 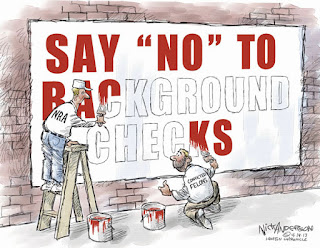 Unwilling to be bothered by a 5-minute, $10 background check at one of the many hundreds of licensed dealers around the state, the sort of which was already required for any gun purchased at gun shops or gun shows, the gun guys howled in anger, led by the extremist Oregon Firearms Federation (OFF).  They responded with openly-criminal responses.  OFF sent out angry email alerts to its followers, urging them to "defy" the law and spreading disinformation about the law (get the true facts, HERE).  Pro-gun county commissioners (including the sister of OFF's executive director) and a rural sheriff or two penned angry statements saying that they would not fund or enforce any background check efforts.  In their usual, treasonous way, local militia groups even vowed "armed civil disobedience."

And then, in an act that could only be called a political tantrum, OFF and its followers decided they would try to recall four of the state legislators who co-sponsored the bill:  Senator Floyd Prozanski, Representative Val Hoyle (House Majority Leader), Senator Chuck Riley, and Representative Susan McLain.  (Hoyle had previously received "A" and "B" ratings from OFF.  Now, suddenly, it was an "F").

I say it was a political tantrum because the entire purpose of a recall is to remove politicians who have demonstrated some form of malfeasance or scandalous conduct while in office.  SB941 went through all of the official committees and channels, with amendments and votes as befits any bill.  It was voted through committees, through votes in both the Senate and the House, and ultimately signed into law by the Governor.  There were no scandals involved in its passage, nor are any of the legislators involved in any political scandals.  In short, the entire process was normal and acceptable.

So why do the recalls?  Vengeance, plain and simple, with no regard for the democratic process.  Staging a recall attempt simply because they disagree with a dutifully-passed bill is an abuse of the process.  But when have gun nuts ever cared for democracy?

Well, the first recall attempt, against Riley and McLain, fizzled in July.  The petitioners had failed miserably to get anywhere near the number of signatures they needed, and no financial or volunteer support from any organizations other than OFF.  These legislators were relieved:

Riley and McLain both expressed their relief at not having to face a recall election.
"I think that's great," said Riley, reached while hiking on Steens Mountain in eastern Oregon.  "I've always said that recalls are really only for people who didn't do what they said they would do, and I wasn't one of those people."

Riley said he campaigned in favor of the expanded background checks and won election last year.

McLain said she was "pretty excited" she doesn't have to spend the next several months fighting a recall election.

"I'd like to be working in the interim on projects that I started during the session," she added.


Imagine that:  having our legislators work on improving our state instead of expending their energy fighting useless recall efforts!

Meanwhile, Val Hoyle prepared to fight the recall.  She started an  "I Stand With Val" campaign, complete with yard signs -- I had one in my yard, too -- and began asking for volunteers and donations.

And then the recall effort against Val Hoyle started to unravel.  A complaint was filed against the recall, demonstrating that the petitioners, which were mainly gun shops (the chief petitioner was a gun shop owner, no less), were using gun shop paid employees to get signatures without registering them as paid petitioners, and were leaving the petitions unsupervised with customers.  It was basically racketeering.  The effort was failing to get enough signatures, and then the recall was dropped entirely when Representative Hoyle announced that she is leaving her post as House Majority Leader to explore running for Secretary of State.

But the gun guys continued to harass Rep. Hoyle with angry and threatening phone calls and messages after the director of OFF shared her personal cell phone number.  Hoyle responded with a campaign to ask her supporters to respond to each threat with a $25 donation, to be used to pay off the cost of fighting the recall.  Her supporters responded overwhelmingly in support.

And then the Prozanski effort started to crumble, too.  Just as with the Val Hoyle recall, a complaint was filed against the Prozanski recall effort, alleging the same sort of mistakes by the gun shops who were collecting signatures.  But this time the gun guys were able to get around it by throwing out those petition sheets, and the Secretary of State ruled, just yesterday, that the other petition sheets could be used.

When the recall against Floyd Prozanski was announced, the supporters of this popular senator immediately jumped to his defense, soon forming a campaign of their own called "Stop Reckless Recalls."  Senator Prozanski later wrote an opinion piece in the local newspaper, stating his case:

The purpose of recall is to hold accountable an elected official who has committed an ethical violation, committed a crime or breached the public trust. According to the Secretary of State’s office, this recall will cost taxpayers $100,000 to $134,000 if it goes forward.

Do taxpayers really want to spend that amount of money because someone disagrees with my legislative votes?

Michaelson-Duffy is upset with my support for Senate Bill 941. The bill closed the last remaining loophole in Oregon’s successful 25-year-old background check law. But people’s rights to own and purchase a gun remain intact under SB 941 unless they are a felon or suffering a mental health crisis.

And then, later in the day, the Secretary of State announced that nearly 2,000 of those signatures were invalid.  Yes, 2,000!  Says a lot about these people.  They were either repeat signatures, or they could not be validated as registered voters in Prozanski's district. The last of the recall campaigns was officially dismissed. From an article:

In a prepared statement, Prozanski said Friday that he was “grateful” for his constituents’ continued support.

“Despite their attempts to distort my record and their personal attacks on me, the political extremists who tried to force a recall vote have been rejected by the voters,” he said.

And so, once again, common sense prevails in Oregon.  If the gun guys had succeeded, not only 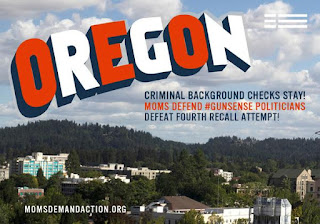 would good legislators lose their positions, but it would set a dangerous precedent that anyone who simply disagrees with a lawfully-passed bill of any type could punish lawmakers with a recall vote.  If that were the case, no politician would willingly take a stand on any hot-button topic.


Instead, the democratic process in Oregon remains secure, the gun guys don't get results from their political tantrum, and we retain commonsense background checks to help keep guns out of dangerous hands.

Thank you, Floyd, Val, Chuck, and Susan, and all those other legislators who sponsored or voted for SB941, for standing up for public safety and for continuing to face down the pro-gun forces.  You have protected the welfare of your people.


Addendum (9/13/15):  Oregon Firearms Federation released an alert wherein they blame their failure to recall Prozanski on interference by "Bloomberg lackeys" and "Bloomberg flunkies," a "Prozanski and Bloomberg cabal," and a conspiracy by the Secretary of State (with no evidence to back up their statement, of course).  I'm shaking my head at their utter refusal to accept the facts, and their conspiratorial, paranoid thinking, so typical of OFF and the gun nuts.

OFF posted the letter that was sent to the chief petitioner for the Prozanski recall, along with the statistical results, HERE.

In their typical, pro-criminal and violent fashion, OFF has told their followers to "Be prepared to resist and defy" (see screenshot from their homepage).

Posted by Baldr Odinson at 1:47 AM