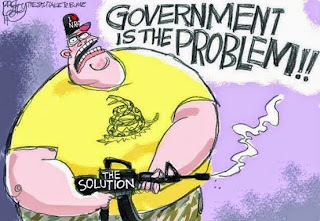 
Back on May 11, Oregon's new background check bill (SB941) was signed by the Governor.  At last, every gun purchase and transfer in Oregon must require a background check, including private sales.

No longer will felons, the dangerously mentally-ill, wife-beaters, minors, or any other prohibited person be able to purchase a gun simply by answering an ad, meeting someone in a parking lot, and paying cash, with no background check.  The seller, too, will be held accountable, and will no longer be able to simply claim ignorance.

Prior to that, according to a report put out by Everytown for Gun Safety, of the people seeking guns in unlicensed, online sales in Oregon, 1 in 18 were barred from owning guns by state or federal law. At this rate, unlicensed sellers in these markets could transfer 1,360 guns to criminals each year.

But the pro-gun forces did their darndest to make sure that the criminals could keep getting away with it!  They employed every trick they could, including false claims that this would lead to gun confiscation and registration and lying about the intent of the bill.  They are now going out of their way to tell the world that they will openly defy the law or, in the case of a few sheriffs and commissioners, refuse to enforce the law.

In short, they are pro-criminal.

That's right.  Pro-gun advocates are pro-criminal and want to break the law.

Don't believe me?  See it in their own words...

The extremist Oregon Firearms Federation, headed by Kevin Starrett, has worked for many years to undermine background checks, attempting to weaken them by writing bills to remove the State Police from monitoring them, and thinks they are no different than gun registration.  So you can imagine Starrett's outrage when SB941 passed.  After the bill was signed by the Governor, Starrett wrote in an alert to his followers (bolding included),

"We urge you to defy this sinister attack on your rights. We urge you to refuse to comply." ... "My friends, this battle has only just begun. Don't despair. Subvert."

And his most recent missive to his followers, ended with, "Be prepared to defy."

O.F.F. took a leading roll in contacting county commissioners, lying to them about the intent of the bill, and leading them to put out statements against the bill.  Starrett's own sister, Mary Starrett, is a county commissioner as well, and has urged her Facebook followers to contact their commissioners and tell them not to fund background checks in their county:

We wouldn't want our elected officials to actually fund the laws they are in charge of funding, would we?  Oh, wait, failing to fund enforcement of a law would be a breach of their oath, wouldn't it?  Mary and these other commissioners might want to go back and take another look at that oath.  Quoting from that oath:

.... I will endeavor to secure economical expenditure of public funds sufficient in amount to afford efficient and economical administration of government in the county for which I have been appointed ....

Commissioners don't make the laws (that's the job of legislators) nor determine if they are constitutional (that's the job of judges).  Their oath demands that they find ways to fully fund them.  That's it.  It's all for show, though.  Funds for enforcing this law don't go through county commissioners, as far as I'm aware.

A few rural sheriffs have also come out as insurrectionists, saying they won't enforce the new law.  Again, these pro-gun sheriffs are openly saying they will break their oath of office, just as they did when the last federal background check bill was being considered.

Grant County sheriff Glenn Palmer is one of those.  During testimony for the bill, he openly stated,

"I have no intention of enforcing this law.  State law allows me to use discretion on misdemeanors and I plan to use it every step of the way."


Sheriff Palmer seems to forget that the second offense for a gun seller who fails to get a background check for the sale is a felony, not a misdemeanor.  In any case, he swore an oath to enforce the laws of his state.  Sheriffs don't make the laws (that's the job of legislators) nor determine if they are constitutional (that's the job of judges).  Their oath demands that they enforce them.  That's it.

Some of these pro-gun forces, including O.F.F. and the equally-extreme militia group known as the Oath Keepers, have organized a rally against the bill at the State Capitol in Salem, on May 30.  In fact, they have even named it the "I Will Not Comply Demonstration."  That's right: they are stating that they won't comply with the law.  In other words, they would rather be criminals.  HERE is the Oath Keeper announcement for it.  HERE is the Facebook page for the event.  From the Facebook page text:

"Salem law says NON CHL people must open carry with an unloaded gun. we will not be in the capitol building, so no worries there. I Wont be checking your guns, so do what you think befits an i won't comply rally!" [sic]


Another pro-gun militia group, the "Sipsey Street Irregulars," sent a letter to Oregon legislators before the bill was passed.  In that letter, they stated,

'Again I ask, how many of us are you willing to see dead to enforce your "benevolent" will upon us? Understand in advance, if you wish to enforce such a law, you will have to kill us. FOR WE WILL NOT COMPLY. We will greet it with the same tactic that we used to nullify every such law passed since Sandy Hook -- armed civil disobedience.'


So much for being "law abiding" gun owners!  It's not too surprising, though, since militia groups, including the Oath Keepers, have a long history of actual crimes and conspiracies.

Feeling vindictive toward the legislators who supported the bill, O.F.F. and some of their followers have now started petitions to recall some of the legislators who sponsored SB941, namely Val Hoyle (who had previously been given an "A" rating by O.F.F.) and Chuck Riley.  The petitions are being advertised by a handful of gun shops and hawked for signatures by their paid employees.  Given the fringe nature of these pro-gunners, and the fact that 79-90% of Oregonians supported the bill, they haven't a prayer of succeeding in a recall.  But vengeance is a virtue to these guys.

To all of these pro-gun advocates, I can simply say this:  We are a nation of laws, passed by duly-elected representatives of the people and interpreted by judges.  You have to follow these laws whether you agree with them or not.  Armed insurrection is illegal and specifically ruled out in the Constitution that you claim to hold dear.  If you don't like the laws, you can either elect officials who agree with you and will work to change them, or you can challenge the laws in a judicial court.  That's the nature of our representational democracy and the checks and balances called for in our Constitution.  You can either follow these laws... or be criminals yourselves.


The complaint says that investigators hired by Our Oregon found that recall petitions were improperly circulated at four gun stores in Hoyle's district. The group charged that employees helped gather signatures and should have registered with the state as paid petitioners. In addition, petitions were often left unsupervised, meaning that some people could have signed them without being witnessed by a canvasser, the complaint says.


A number of gun stores are pushing the petitions, using paid employees who are not registered as petitioners to garner signatures from store patrons.  This is a crime: racketeering.  They are also leaving the petitions unwatched, allowing for the possibility that people may be altering the petitions.  From the complaint:


Oregon elections law is unambiguous. If a person is receiving compensation while circulating a Recall Petition, that person must register with the Secretary of State and meet certain requirements (including passing a background check showing no prior convictions for forgery, fraud or identify theft). The evidence establishes that the Gun Stores and their employees appear to be engaged in paid signature circulation, in violation of Oregon elections law.

The evidence also establishes that the Chief Petitioner and the Recall Committee are not properly supervising circulation of the Recall Petition. The actions of Chief Petitioner Jason Thiesfeld, the Gun Stores and their employees, and the Recall Committee appear to constitute violations of Oregon elections law, Oregon criminal law, and ORI CO. Submission of the Recall Petition sheets discussed above, and petition sheets gathered under similar circumstances, may well constitute false certification under Oregon elections laws, and under Oregon's criminal code. The collective actions of Mr. Thiesfeld, the Recall Committee, the Gun Stores and their employees appear to be a racketeering, in violation of ORICO.

Sounds pretty airtight.  Not that the gun guys care.  As I said above, they are pro-criminal.  What's "racketeering" compared to helping prohibited people continue to buy guns?

Gee, I wonder why the gun stores are pushing it so hard?  Could it be that they aren't really interested in a recall at all?  Could it be that, instead, their main interest is really just to sell more guns to the tiny minority of citizens who are vindictive, pro-gun extremists?  Hmmmm...

In any case, the named gun stores haven't stopped collecting signatures.  In fact, they've doubled down their efforts with new signs.

UPDATE (6/2/15): Lane County commissioners, led by the Tea Party member Jay Bozievich, recently wrote a resolution denouncing the background check law, siding with criminals and the opinion that prohibited people should continue to be able to buy guns without a background check, and going against their oath of office to fund the law.  From an article:


"Technically, it doesn't change the fact that you're going to have to abide by that law. Now whether or not you fail to do that, we're going to be able to investigate and prosecute your failure to do so, is basically what we're stating. We don't have those resources and we probably will not be prosecuting and investigating people under Senate Bill 941," said commissioner chair, Jay Bozievich.

The resolution passed 4-1. Pete Sorenson was the lone "no" vote.


In response to Commissioner Bozievich, the Executive Director of Ceasefire, Penny Okamoto, responded:


“This is just a way for Republicans to curry favor with Oregon firearms advocates," Penny Okamoto, executive director of Ceasefire Oregon, a non-profit organization that aims to reduce gun violence, said on Wednesday.

“Do they mean to tell me the sheriff won’t prosecute the person who provided a murderer, illegally, with a gun?” Okamoto said.

Posted by Baldr Odinson at 1:15 AM