(UPDATED -- Kessler has been officially terminated as police chief.  See below, at bottom)

I've blogged before about Mark Kessler, one-man police force of Gilberton, PA, who posted a series of YouTube foul-mouthed rants wherein he used full-auto assault rifles to shoot up targets that symbolized Nancy Pelosi and John Kerry.  "Shoot her in the face.  She will get the message!" he said.

What followed was a spectacle, wherein Kessler made an ass of himself with a large group of heavily-armed cronies standing around, brandishing their weapons as the Gilberton borough council debated what to do, then decided to suspend him for using his police-weapons for his threatening videos.  Gilberton is a laughing-stock of the nation and new symbol of violent, pro-gun, insurrectionist rhetoric, thanks to Kessler.

And it's not the first time he's made an ass of himself and even broken the law.  As I listed previously, Kessler has falsely-arrested a borough councilman before, and even had him strip-searched, because of noise complaints; Kessler was involved in a bar fight wherein he unintentionally shot himself in the hand, then conveniently lost his handgun; he threatened to abandon his oath of office if any gun legislation were passed; he has repeatedly promulgated ridiculous pro-gun conspiracy theories as a guest at infowars.com, and he is an organizer for a militia group, which he recruits for on his website, which is illegal in the state of Pennsylvania.  And all of this without even being accredited as a police officer!

He's so sorry of a loser, in fact, that even the extreme of the extreme, the Oathkeepers militia group, have distanced themselves from him.

Numerous petitions have been created calling for the firing of Chief Kessler, such as this one.

Since my last post, the Gilberton borough council has started to investigate and take inventory of the weapons that Kessler has purchased for himself through his role as police chief, and where they are stored.  And the borough's insurer has threatened to drop coverage of the borough if they don't discipline or terminate Kessler.

Naturally, Kessler feels not one inkling of regret for his threats.  In fact, he's doubled down on them.  In a new online video, Kessler fires off another full-automatic machine gun at targets that symbolize the Gilberton council president and the council vice-president, calling them "libtard" and "tyrant."  He suggests that they are going to "molest" him and, after Kessler shoots them, they get their "mangina" hurt.


On his webpage, where Kessler begs for donations for his defense, he calls the county sheriff a "thug" and the district attorney a "tyrant," declares both of them an "enemy of the state," and calls the rest of the council "political hacks" and "scum polaticians" [sic].

Like pro-gun extremists everywhere, he sees himself as some sort of Second Amendment hero with his insurrectionist talk, and a figure of some growing revolution to overthrow the government.  On his Facebook page, Kessler is even vainly posting a graphic that suggests such a revolution that starts, naturally, in his home town (see screencapture image from his Facebook page to the left).  Says one of his supporters, in response:


"let it begin with the citizens of Gilberton storming the town offices & dragging the idiots trying to fire Chief Kessler out in the streets & telling them that Gilberton no longer wants or needs their services."


and other such extreme language, none of which Kessler responds to or tries to calm.

Elsewhere on his Facebook page, Kessler poses in pictures with his armed buddies, assault rifles and .50-caliber sniper rifles in hand, in front of a billboard that calls for him to be fired (see picture to right).  The implied threat is clear: if the borough finally acts with rationality and removes Kessler from his job, Kessler and his pals will respond with violence.


MY father whom I see as a true american hero always told me , "you can only kick a dog so much before he bites" , I'm here to state this dog has been getting kicked, abused threatened long enough, May GOD be my witness, I shall fight till my last breath! for only God himself will judge me !


No, Mr. Kessler, the rest of America is judging you too, and deciding that you are insane.

Like all pro-gun extremists who are called out for their behavior, Kessler peppers his Facebook pages and website with statements that suggest that it is he, and not those he threatens, who is the victim in this whole affair.  Umm hmm.  Delusions won't save you, Kessler.

I'm not surprised, after all of Kessler's open threats, name-calling, and posturings, that the borough council is considering termination of Kessler.  It's about time.  Long overdue.  If they had done so before, after his past illegal and threatening behaviors, they wouldn't be in the national spotlight for this now.

Kessler and his attorney have drawn out the inevitable end to this sordid tale by refusing to meet with the council, delaying until at least next week, leading the council to extend the no-pay suspension.

Like watching an Indy 500 crash, it's fascinating and shocking at the same time to watch as Kessler's job and reputation implode.  We'll see what next week brings.


UPDATE (9/5/13):  Chief Kessler has been suspended indefinitely.  Since he is under contract, an outright firing isn't possible, apparently.  From the article: 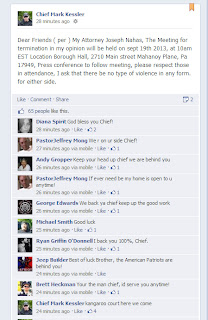 But the council’s official decision on Kessler's fate is pending. Because of scheduling difficulties, a hearing could not be held and Kessler’s unpaid 30-day suspension was extended Friday, his attorney, Joseph Nahas, told the Associated Press. Nahas said the disciplinary hearing would probably be held next week. ...

“He seems to want to take things into his own hands,” said Michael Morrill, executive director of Keystone Progress, adding that a termination could prove dangerous because some of Kessler’s supporters have called for violence as a retaliatory measure. ...

You can’t have a police chief that intimidates at least half of the population,” Morrill said.

According to Kessler, on his Facebook page, the council will meet to decide on termination on September 19.  Kessler then comments, "Kangaroo court here we come". See screenshot, at right.

UPDATE (9/20/13):  Kessler has officially been terminated as Chief of police.  From the CNN article:

Kessler was suspended July 31 at a council meeting that drew thousands of his supporters, including some openly armed, to the small town in Schuylkill County in eastern Pennsylvania
He will remain on suspension for 10 days to give him time to appeal, Malloy said. He would not comment further.

"We knew it was coming," Kessler said after the vote, CNN affiliate WFMZ-TV reported.


UPDATE (10/9/13):  Kessler continues to call himself "Chief", and continues to be a magnet for insurrectionist extremist types.  Recently, these leadheads are using Kessler as a catalyst for a "truck-in" protest against the government.  See here:
http://penigma.blogspot.com/2013/10/keep-on-truckin-mark-kessler-posterboy.html

Kessler also continues to encourage such insurrectionist behavior, with anti-government and pro-militia nonsense posted on his Facebook page.

UPDATE (2/24/13):  This extremist has finally been terminated as police chief.  What took so long?  So what's next for this gun loon loser?  A reality show, of course, so that the world can continue to marvel at this magnet of our violent gun culture.  Making stars of ignorant, violent extremists is becoming a national past time.
.
Posted by Baldr Odinson at 12:21 AM