Surprise, Schools Can't Afford To Arm Their Staff Due To Insurance Premiums 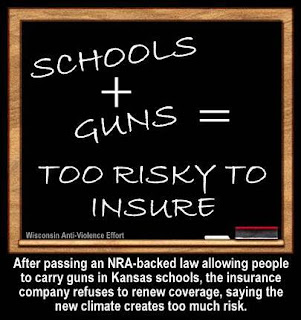 Following the Sandy Hook school massacre, the NRA’s Wayne LaPierre and pro-gun lapdog Asa Hutchinson went to the podium to give the NRA’s solution to our gun violence problem.  But instead of embracing any commonsense reform to keep guns out of the hands of madmen to begin with (such as universal background checks, better mental health screening, or limits on assault weapons or high-capacity ammo magazines), the NRA’s solution was instead to arm all schools by insisting that all schools have armed guards.  They suggested not only having policemen on school grounds, but even arming school teachers, staff, and volunteers with conceal carry permits.

Of course, in their rush to sell more guns arm all schools, they had absolutely nothing to say regarding where the funding for all these guns and guards would come from.  Hutchinson suggested that the guards be 100% volunteer.  I've been involved with various volunteer organizations for decades, including Ceasefire Oregon (which is also 100% volunteer), and I can say with a great deal of certainty that this isn't a solution.  Volunteers come and go, have all sorts of different motivations, and usually have higher priorities in their lives than the volunteer activity in question.  These problems are a nightmare in the making, when it comes to our children’s safety.  And if we talk about paying people to guard schools, where is the money coming from?  Schools everywhere are already pushed to the financial breaking point.

As I’ve pointed out, there are no incidents where a school guard has actually stopped a mass shooting at a school by pulling their weapon, or any other mass shooting, for that matter, but I know of at least 6 accidents CAUSED by armed guards and conceal carriers on school grounds, including one where a student was hit in the leg.

Nonetheless, some states and municipalities are following the NRA call for creating armed camps of our kids’ schools.  Here in Oregon, for instance, schools in Eagle Point and Harrisburg have been discussing it.  It’s currently legal for schools to set a pro-gun policy for staff in Oregon, and conceal carriers can freely carry guns in schools if they aren't staff.

As stated in a New York Times article yesterday:

But, oopsie, the NRA forgot to think of one, tiny, little detail:  Insurance companies, whose job it is to rationally consider statistical risk, aren't interested in insuring armed schools.  It's simply too risky, particularly around children.  From that same article:

But already, EMC Insurance Companies, the liability insurance provider for about 90 percent of Kansas school districts, has sent a letter to its agents saying that schools permitting employees to carry concealed handguns would be declined coverage.

“We are making this underwriting decision simply to protect the financial security of our company,” the letter said.

In northeast Indiana, Douglas A. Harp, the sheriff of Noble County, offered to deputize teachers to carry handguns in their classrooms less than a week after 26 children and educators were killed in a school shooting in Newtown, Conn. A community member donated $27,000 in firearms to the effort. School officials from three districts seemed ready to sign off. But the plan fell apart after an insurer refused to provide workers’ compensation to schools with gun-carrying staff members.

The Oregon School Boards Association, which manages liability coverage for all but a handful of the state’s school districts, recently announced a new pricing structure that would make districts pay an extra $2,500 annual premium for every staff member carrying a weapon on the job.

Scott Whitman, an administrator at the Jackson County school district in southern Oregon, where a committee is looking at arming school staff members next year, said costs would be a factor in the decision. With 10 buildings, the expense of arming and training more than one staff member at each school would easily exceed $50,000 a year.

“Pretty much every last bit of our money is budgeted,” he said, adding, “To me, that could be quite an impediment to putting this forward.”

From a USA Today article:

As of Saturday, no Kansas school districts had adopted a policy of allowing people with concealed carry permits on their campuses as permitted under the new law, said David Shriver, director of the Kansas school board association's insurance program.
Bob Skow, chief executive officer of the Independent Insurance Agents of Iowa, said he's not surprised by the companies' decisions. Insurance is all about risk and about pricing the cost of coverage in a way that correctly reflects it. That's one of the reasons many schools have gotten rid of their trampolines, he said.
"It's one thing to have a trained peace officer with a gun in school; it's a completely different situation when you have a custodian or a teacher with a gun," Skow said. "That changes the risk of insuring a school and magnifies it considerably."

Naturally, the pro-gun folks are scratching their heads.  Nothing says “safety” more to them than having a plethora of lethal weapons available.  But, of course, the rest of us agree with insurers, whose job it is to determine risk in a statistical manner.

Arming schools is an idea that is very unpopular with nearly every national organization representing parents, teachers, and law enforcement, as well as the citizens of Newtown, and has no merit with any historical context.  It’s time to listen to them and put this whole, dangerous nonsensical suggestion by the NRA to rest.  Support commonsense gun regulation to keep guns out of the hands of children and bad guys to begin with.
Posted by Baldr Odinson at 3:46 PM