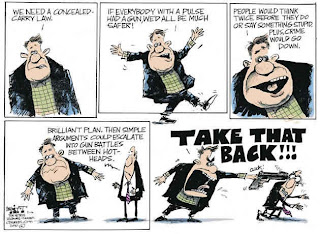 The NRA and other gun lobbies have stated implicitly that gun owners are upstanding and respectable people, and greatly downplay any shootings other than those committed by violent criminals or gang members.  As Wayne LaPierre famously said, “The only thing that stops a bad guy with a gun is a good guy with a gun.”

Unfortunately, those “good guys with a gun” are responsible for a great many shootings, either out of anger, or due to accidents (like this guy who killed a child because he used his assault rifle as a “crutch”), or because they left their guns where others, like children, could get to them.  We post on these incidents with children every day over at the Kid Shootings blog.  Even people with conceal carry permits, who are raised on a pedestal by the gun lobby as supposedly well-trained and safe enough to be vigilante guards of our children in schools, are responsible for many murders.

But almost as stupid as leaving guns where kids can access them is when supposedly law-abiding gun owners get angry and shoot over trivial things.

Notice that not one of these cases involved drugs, drug dealers, or, apparently, hardened criminals.  Gee, none of these were “good guys” shooting “bad guys,” either.

These are just a handful of stories I’ve heard in just the last day, without even trying to search.  There’s no shortage of such stories, of people shooting and killing each other over the stupidest of reasons.

Certainly, most gun owners are responsible people.  And yet, in nearly every gun purchase, you don’t need a shred of safety or proficiency training to purchase a gun for home use, and little if any for conceal carry, either, in most states.  And if a person is known to be mentally unstable or violent, yet hasn’t yet been adjudicated as mentally ill or arrested for a felony, then in most cases they can own as many guns as they want, no matter how much their neighbors and family fear them.


Until we change this, we can expect more and more of these murders over stupid things to continue.
Posted by Baldr Odinson at 8:24 PM