The Holidays Are About Peace And Goodwill, Not Guns

I want to wish all of my readers a very peaceful and joy-filled Christmas and holiday season. 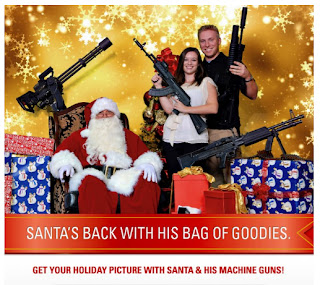 I celebrate Christmas.  But regardless of which holiday you celebrate, the holiday season is about peace and goodwill toward our fellow citizens.  It's about family values.  It's about putting the worst of us behind us and going into the new year with a renewed sense of bettering ourselves and our communities.  To that end we celebrate by enjoying a little light in the darkest time of year -- namely the light of our faith and our fellowship.
Do guns fit into that philosophy?  Are lethal weapons part of the "goodwill toward Man?"
Earlier this month, the gun guys in Scottsdale reveled in their gun fetish as part of their season of joy by posing with their children and Santa ... and machine guns.  See the picture, above.  Said the owner:

"It's designed to be a holiday-themed event where people can express their passion for firearms and the holiday spirit."


Really?  The "holiday spirit" involves deadly weapons to these people?  Do they really celebrate the same holiday I do?  It doesn't seem to resemble mine.  And if you think violent movies and video games glorify guns and violence to our young children, just wait until they see Santa wielding his AR-15!
Listen to how Fox commentators try to justify it, saying it's a "reminder to visiting Europeans" not to invade us, and a threat to Occupy protesters that "the other side is better armed."  Wow.   And when one of the panel questions the involvement of children in this nonsense, watch how the gun apologists jump on him.  Is this how we want our nation to see Christmas?
And gun sales are apparently up this Christmas season in Springfield, Missouri.  From the article:

Firearms sales are always brisk this time of year at Gunsmoke Gun & Pawn.
"A lot of guys are buying themselves guns for Christmas," says manager Brandon Reynolds. "It's Christmas bonus season and people have a little extra disposable cash."
And giving firearms as gifts is becoming as popular as any flat screen TV or bicycle.
"We sell a lot of concealed carry weapons," adds Reynolds. "We do the classes here and they're full just about every Saturday."
Sales for concealed carry weapons -- or CCWs -- are on the rise, especially since August when the minimum age for a permit dropped from 23 to 21.


Nothing expresses your joy and love for your loved ones like lethal weapons, apparently.  And how very relieving to know that people just out of their teens are now arming themselves on the streets of Missouri.  They'll have great judgment for life-and-death situations, I'm sure.
We need to fight this deadly nonsense.  Christmas is about understanding and peace, not about arming ourselves and our paranoia.
Here's one thing I'm grateful for today.  Here in the Eugene/Springfield area of Oregon, there hasn't been anyone killed or injured by firearms since early November, as far as has been reported in the media.  It must be some kind of a record.  There's been at least ten armed robberies with guns since then (bringing the yearly total to something like 30 now), but at least no one was harmed.  Let's hope the relative peace holds for a while longer.  Other areas of Oregon haven't been so lucky.
From myself and Ceasefire Oregon, I wish all of you a peaceful and joyous holiday season.  Put away your guns, eat some fruitcake, spend just a little bit of your time helping someone less fortunate, and try to recognize that even the worst people out there have at least a shred of decency worth appealing to.  Merry Christmas, and may peace be with you.

ADDENDUM (12/30/11):  Man who killed his entire family and himself after unwrapping presents, and dressed as Santa, was pre-meditated; distraught over financial issues:
http://mikeb302000.blogspot.com/2011/12/update-on-texas-santa-claus-mass.html