The Growing Movement Of Gun Owners Against The NRA 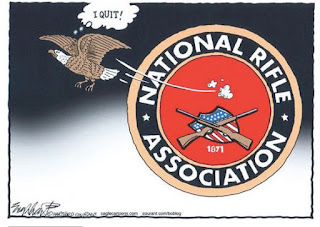 The NRA was once a respectable organization.  Founded just after the Civil War, it existed to advocate for hunter training, marksmanship, conservation of nature, and gun safety.  It was a sportsman's organization which existed almost solely on membership dues and did not dip much into politics.  But all of that changed in 1977, when extremist members of the organization hijacked the sportsman's organization and converted it into a political lobby group intent on fighting any and all gun regulation.  As the Washington Post put it:


The Old Guard was caught by surprise. The NRA officers sat up front, on a dais, observing their demise. The organization, about a century old already, was thoroughly mainstream and bipartisan, focusing on hunting, conservation and marksmanship. It taught Boy Scouts how to shoot safely. But the world had changed, and everything was more political now. The rebels saw the NRA leaders as elites who lacked the heart and conviction to fight against gun-control legislation.

And because their focus shifted away from the needs of their members, and more toward ideological and legislative goals, the NRA leadership has forgotten their own followers.  Oh, they still talk the good talk of safety and hunting, but the truth is far from it.  Their only concern is money.  As I blogged before, follow the money!  And they've created a "circus of fear" to raise the ideological paranoia of their membership.

Time and again in my work with the community, in forums and public events, I talk with gun owners, hunters, and veterans who disagree with the NRA's stances.  Even some NRA members have expressed to me that they simply disagree with the organization and are actually closer to me in their beliefs on gun regulation.  Sometimes all it takes to make this conversation work is to get around the NRA talking points and to ask them about specific regulations. 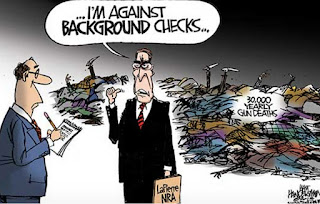 Background checks are a good example of this.  At every turn, the NRA has fought each and every attempt to create and then strengthen the background check system, pouring millions of dollars into the pockets of politicians to buy their votes.  And even though a background check takes on average less than five minutes, and there are far more licensed dealers to go to for the check than there are Starbucks stores (see an interactive map, HERE), they nonetheless argue that that minor inconvenience somehow infringes on the right to bear arms and is a prelude to an all-out total gun confiscation (expanding background checks, by the way, used to be something the NRA approved of, and now heavily oppose, just to illustrate how extreme they have become).  And yet, polls repeatedly show that around 72% of NRA members support universal background checks for all gun sales (or 85% of all gun owners).  So who does the NRA really represent?  Again, follow the money.  They represent the arms dealers who line the pockets of the NRA leadership.  The same split goes for many other proposed regulation.  Despite the NRA line against such changes, the majority of gun owners also support a ban on semi-auto assault rifles and high-capacity ammo magazines, support child access protection laws, mandatory training for gun owners, prohibitions for gun ownership by domestic violence offenders, and many other laws.

With this in mind, it is little wonder that more and more gun owners are renouncing the NRA.

An early and well-publicized example of this was the senior George Bush, a lifelong gun owner and hunter.  In 1995, he sent in a "letter of resignation" from his lifetime NRA membership after the NRA's Wayne LaPierre called the government "jackbooted thugs" shortly after the Oklahoma City bombing.

And remember, back in 2013, when longtime Guns & Ammo writer and TV host Dick Metcalf dared to write that regulation should be considered and that it didn't infringe on the Second Amendment?  He was immediately fired, but not because gun owners disagreed with him.

In recent years, particularly after the Sandy Hook shooting and the NRA's extremist solution to arm all schools, gun owners have woken up to the fact that this isn't their father's NRA anymore.

That was the event which turned one gun owner's opinion around.  She's a hunter and grew up in a gun family.


Ultimately, the people that are advocating for looser gun laws or less restriction end up making responsible owners look like idiots. Personally, I don't want to be associated with them, and I don't want to be lumped together. Some of us understand that keeping our children safe is the priority. We have too much gun violence in this country to ignore it anymore.

She was so fed up with the NRA and the pro-gun activist movement that she left the NRA and even joined Moms Demand Action Against Gun Violence in America. 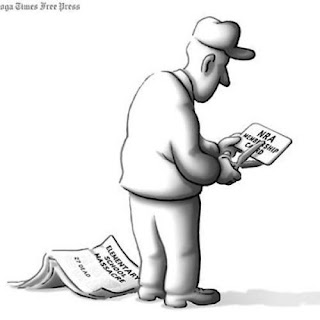 One avid hunter recently turned his back on the NRA, tired of their ceaseless fearmongering:


The biggest problem in this entire issue is the NRA. People who buy guns and are interested in hunting or target shooting are not the problem. The problem is an organization that convinces them to join based on fears of the government, fears of other races, fears of invasion, fears of the police; FEARS. That’s their agenda.

Once you’ve paid your dues to join this despicable organization, they are free to use that money however they see fit. And overwhelmingly the way that they see fit to spend it is through propaganda, advertising, and lobbying.

Another hunter, from Oregon, explained why the NRA doesn't talk for him:


I don’t belong to the NRA. The kind of hunting that I do faces its greatest threats from habitat loss, not gun control. During an election, I’m more likely to consult the League of Conservation Voters’ candidate ratings than the NRA’s. ....

None of these restrictions prevent me or other hunters from enjoying the tradition. On the contrary, the rules keep us safe and protect the wildlife populations that must thrive if we are to continue to responsibly cull them.


After the Charleston massacre, another gun owner and hunter came out against the NRA after hearing a robo-call insinuating that President Obama was plotting to turn over the USA to the United Nations:


[The NRA] has successfully positioned itself as the singular representation of gun owners. For decades they’ve worked to defend and expand access to firearms in spite of polls showing that most Americans, including gun owners, favor laws that would limit access in various reasonable ways (even three-quarters of NRA households favor background checks prior to private gun sales). But when a U.S. congresswoman was shot in the face, the NRA made certain that no law was passed that would have made her safer. There’s no doubt that the NRA does have some grass-roots support, but it’s smaller than we think. The NRA does not represent all gun owners, and it certainly doesn’t represent me.


One Nevada legislator and lifelong hunter has turned his back on the NRA, as well, fed up with their inflexibility and tired of seeing so many people killed by gunfire in his years as an emergency responder, along with his own personal family history of gun suicide and domestic violence:


“That, coupled with seeing Congress’ inaction [on gun control] made me say, ‘I can’t do this anymore,'” Oceguera told ThinkProgress. “I still own guns for self-protection in my home, and I’m going to teach my kids gun safety and have already started doing that. But I now think there are some people — who are criminals, who have mental illness, who are on the watch list — who shouldn’t have guns. It’s as simple as that. And I think that if law-abiding NRA members and gun owners like myself don’t stand up and say, ‘Geez, enough is enough. Let’s do something,’ then nothing is going to happen.”

There's even a lifelong gun owner, trainer, and gun store owner who has turned his back to the NRA and the pro-gun extremists out there.  Michael Weisser, or "Mike the Gun Guy," has written books on the subject, and regularly writes on his blog site.

And gun owners have even joined together to form organizations to represent their interest in both gun ownership and reasonable gun regulation.

For instance, here in Oregon, some of the gun owning families who lost loved ones at the Clackamas Town Center shooting formed the organization Gun Owners For Responsible Ownership.  That organization then joined the Oregon Alliance For Gun Safety and helped to pass Senate Bill 941 for universal background checks in Oregon.   GOFRO's mission statement:


We envision an America where all are safe from gun violence, and where responsible gun owners take the lead to promote safe gun ownership and sensible laws and regulations.

And they aren't alone.  Here are some other like-minded organizations and Facebook groups of gun owners:

It is moderate gun owners who will make the biggest difference.  Don't let the NRA and other extremist pro-gun organizations speak for you!  Call them out for their extremism, and renounce your membership.  Help enact the sensible gun regulations that you support, and let's make a new trajectory for our communities away from gun violence.

ADDENDUM (1/19/16):  The recent executive actions by President Obama to strengthen the background check system are also very popular with gun owners, at 63% approval, despite the NRA opposition to them.  From the article: 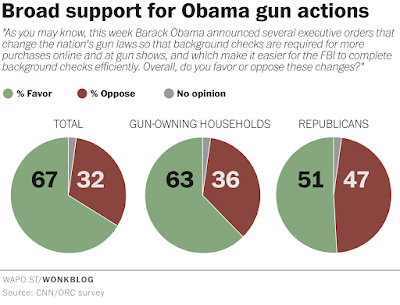 Also, though it is from 2012, here is a very good opinion piece written by an NRA member who was outraged by the NRA stance after Sandy Hook and demanded to immediately cancel his membership.


“I honestly believe that God-fearing, gun-owning Americans should be leading the debate on gun laws,” Dr. Haring said in an interview on Monday, after learning of another shooting, which killed four people at a Waffle House a few miles from his house. “It just makes sense to me that if I own weapons, I should be the first one to be advocating for safety with those weapons.”