Who Does The NRA Really Represent? Follow The Money. 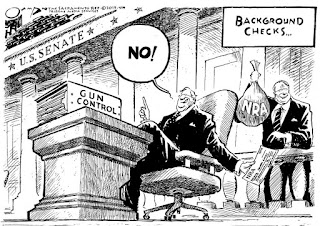 The NRA, as with other gun lobby groups, likes to promote itself as a membership-based organization that is fighting for the gun rights of the average gun owner, supported by their memberships, to promote gun safety and Second Amendment rights (but only the second half of the Second Amendment, mind you).

The NRA claims to have almost 5 million dues-paying members, a number that the organization likes to promote.  But this number is almost certainly greatly-inflated, with a real number down around 3 million.  That sounds like a lot of people still, until you consider that there are around 70 million gun owners in the United States, around a declining 22% of Americans, which means that the NRA only represents around 4% of gun owners, and this a tiny percentage of the total U.S. population of 320 million people.

Nonetheless, the NRA is a political powerhouse, pushing politicians to vote against their conscience to oppose any and all reasonable regulation to keep guns out of the hands of those who would misuse them.  Why?  Follow the money.  Many tens of millions of dollars come from gun makers to the NRA.  From an article:

Since 2005, the gun industry and its corporate allies have given between $20 million and $52.6 million to it through the NRA Ring of Freedom sponsor program. Donors include firearm companies like Midway USA, Springfield Armory Inc, Pierce Bullet Seal Target Systems, and Beretta USA Corporation. Other supporters from the gun industry include Cabala's, Sturm Rugar & Co, and Smith & Wesson.

The NRA also made $20.9 million — about 10 percent of its revenue — from selling advertising to industry companies marketing products in its many publications in 2010, according to the IRS Form 990.

Additionally, some companies donate portions of sales directly to the NRA. Crimson Trace, which makes laser sights, donates 10 percent of each sale to the NRA. Taurus buys an NRA membership for everyone who buys one of their guns. Sturm Rugar gives $1 to the NRA for each gun sold, which amounts to millions. The NRA's revenues are intrinsically linked to the success of the gun business.


And why do the gun manufacturers give the NRA so much money?  Is it to promote gun safety?  Hardly.  In the last election cycle, the NRA spent over $28 million on campaign contributions -- paying off our elected officials to make it easier for guns to get in to any and all hands.  More from the previous article:

"Today's NRA is a virtual subsidiary of the gun industry," said Josh Sugarmann, executive director of the Violence Policy Center. "While the NRA portrays itself as protecting the 'freedom' of individual gun owners, it's actually working to protect the freedom of the gun industry to manufacture and sell virtually any weapon or accessory."

You can read more details from a Violence Policy Center report about the close ties between the NRA and gun manufacturers, as well as in this Forbes article.

What does this mean for gun owners?  It means the NRA does not really speak for them.  For instance, a study out of Johns Hopkins found that 85% of gun owners supported background checks for all gun sales, including private sales.  63% support banning semi-auto assault weapons.  And 60% support banning high capacity ammo magazines.  And it doesn't stop there:

Similarly, the majority of gun owners (67 percent) also support allowing cities to sue licensed gun dealers when the gun dealer's sales practices allow criminals to obtain guns and requiring a mandatory minimum sentence of two years in prison for a person convicted of knowingly selling a gun to someone who cannot legally have one (71 percent).

See more on these disagreements with the NRA HERE and HERE.

But don't tell all that to the NRA leadership.  They oppose such bills at both the state and federal levels.

The bottom line is that NRA doesn't care if a gun winds up in the hands of a felon, a child, or the mentally ill.  Every gun that is sold is another dollar in their pocket and the pockets of the gun manufacturers.  Follow the money!