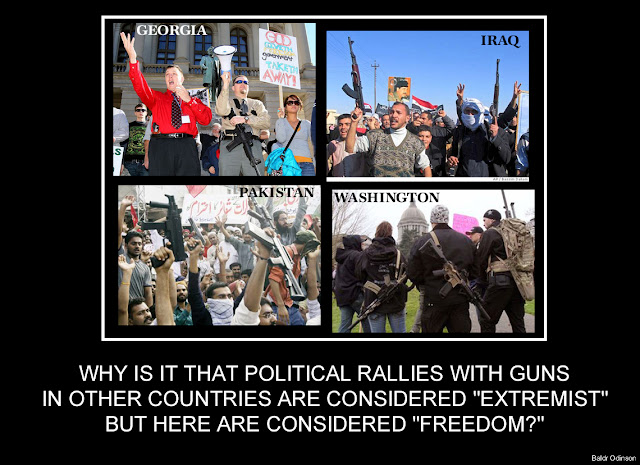 Sunday, our President, Barack Obama, gave the oath of office of President of the United States in the Oval Office, officially beginning his second term in that role, by the will of the American people.

Today, Monday the 21st of January, he gives his inaugural speech, on the same day as Martin Luther King Jr. Day.

But back on Saturday, when the rest of America was gearing up for this momentous occasion, the gun lobbies had a different agenda.  They, instead, chose to make up a new day, which they called "Gun Appreciation Day."  A day made up by a White Supremacist Group. From the article:

The event is being billed as Gun Appreciation Day and has backing from white supremacist group American Third Position (A3P), Media Matters reported on Friday.

A3P, which is listed on the Gun Appreciation Day website as a sponsor, does little through its own content to veil the fact that the political movement is dedicated to white supremacy.

In its mission statement, A3P writes that it "believes that government policy in the United States discriminates against white Americans, the majority population, and that white Americans need their own political party to fight this discrimination."

It goes on, saying that the group aims to "stop the immigrant invasion" in order to put "America first!"

A3P has been listed as a white nationalist hate group by the Southern Poverty Law Center.
In an email to The Huffington Post last year, A3P's chairman candidly admitted to his white nationalism, saying that he found it a "just and proper position for all white people to hold."

Yikes.  But the clearly racist origins of the event did nothing to slow the fervor of the gun guys.

Here in Oregon, several hundred gun owners showed up on the steps of the capital building, as they did at many other state capitols, brandishing their assault rifles and handguns, like some scene out of a third-world nation.  Why is it when we see such scenes from Pakistan or Iraq that we think "extremist," but some people see the same thing here and think "freedom?"  I see no significant difference.  They can try to dress it up in patriotic language, but it's intimidation of our lawmakers, plain and simple, and shouldn't be tolerated.  Along with nonsensical signs about prying guns from their cold dead hands were radical anti-Obama and insurrectionist signs, too.

Meanwhile, the shootings and gun crimes continue, unabated.  Here in my home town of Eugene on that day, a woman got hold of her roommate's guns and fired a shot, then holed up in the home, threatening to shoot herself, until a SWAT team used tear gas and stormed the home, pulling her out alive.  On the same day here in Eugene, a man with warrants out against him hid in the back of a car and then kidnapped two men who got in, at gunpoint, of course.  Luckily, they eventually overpowered him.  The night before, a 16-year old girl was shot to death.  Her killer fled to California, where he shot himself to death as well.  I don't think any of these people or their families appreciated guns very much that day.

Across the nation, murders, suicides, and accidents continued, including five people unintentionally shot in three different shootings at gun shows. 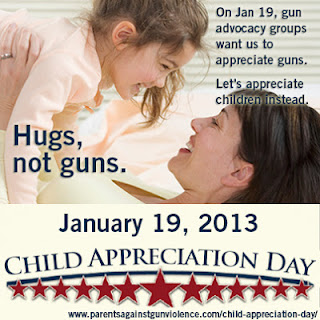 Parents Against Gun Violence had a better idea.  They chose instead to celebrate Child Appreciation Day.  That's a far better area to appreciate, I think, given that 3000 kids are killed each year in gun crimes, and another 14,000 are injured.

It's time to stop appreciating guns, and start appreciating the welfare of our people.  I call upon our lawmakers to ignore the extremists with guns at their doorsteps and do what is right to protect our people from guns getting into the wrong hands.

UPDATE (1/22/13):  The Daily Kos published a list (non-comprehensive) of at least 103 shootings that happened on "Gun Appreciation Day."  I don't think those victims appreciated guns very much, do you?