"Celebratory Gunfire" Kills. Watch For It This New Year's 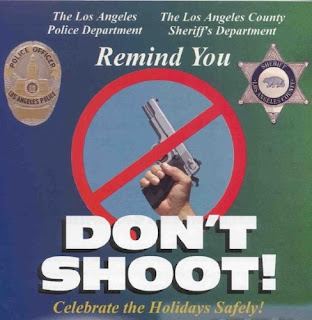 Every year, I hear reports of people shot, injured, or nearly hit by bullets fire on New Year's and other holidays (4th of July comes in second, when I last blogged on the topic).  For instance, HERE is one from last New Year's, where a 14-year old boy was wounded in Illinois.

Another from last New Year's was a 12-year old boy in Florida (the "Gunshine State"), Diego Duran.  He was sitting outside watching fireworks with his family when a bullet struck him in the head.  He went into a coma for a while, but survived and has recovered, though with memory damage and a shunt in his head.  From an article:

As 2011 turned to 2012, Diego and his family were celebrating the New Year by watching fireworks from their yard; their home is an oasis of peace, surrounded by acres of solitude. Within the first few minutes of the New Year, Diego suddenly fell to the ground, bleeding. A bullet, fired into the sky from possibly miles away, found him and changed his life forever. Somewhere out in Ruskin, his assailant remains unknown and unidentified, someone who fired a gun into the air in celebration without giving thought to the fact that the bullet that emerged from the barrel did not simply disappear into the night sky. It came back down and struck a child. Intent or deliberation are not factors because the thoughtlessness of such an act is little different from a direct shot at a child; the end result was the same. A child was struck in the head by a bullet and instantly began fighting for his life. Until that moment, the young family rightfully thought they were safe in their own yard, celebrating the New Year together at home. But celebratory gunfire knows no boundaries. No one is safe from it.

Over the past year, Diego has endured repeated surgeries, gains and setbacks. He never stopped fighting for his life and is now on the road to recovery. And now he is fighting for the lives of others.
“Diego continues to improve overall,” Sandy said. “He still has a shunt to help drain his cerebral spinal fluid and he is on blood thinners due to a constricted artery in his brain. Still, he seems to be just great! If anyone was to see him in person, they would not even have a clue of what he had been through since January 1 of this year.”

Upon meeting him it is clear that Diego is an intelligent, polite, creative and sensitive young man. His struggle to recover and his fight to prevent this from happening again have garnered worldwide attention. He is still coping with memory loss but is improving thanks to the dedication of his family, teachers and therapist.

Diego and his family now work hard to try to fight this phenomenon through an organization they started, called Bullet Free Sky.  Here is a link to their website:  http://bulletfreesky.com/spread_the_word.html.  They also have a Facebook page.

From that previous article:

“We are doing our best to educate people regarding the dangers of celebratory gunfire, a very irresponsible use of a firearm,” Sandy said, referring to Bullet Free Sky. “We have had booths at events leading to the New Year. We’re working on a public service advertisement to air on television and are planning on educating students in schools.”

You can help their efforts by visiting the Bullet Free Sky website at www.bulletfreesky.com. There, you can find free posters, banners and flyers in both English and Spanish to download and display at businesses or anywhere they can be seen by the public. On the website, there are also t-shirts, wristbands and medallions for sale, with all of the money earned going back into the nonprofit organization and used to help fund current and future activities to help keep the skies over South Hillsborough and America bullet free.

“You can help create awareness without even saying a word,” Sandy said of the t-shirts, wristbands and medallions. One person can make a big difference. One person may save a life.”

My friend, Joe Jaskolka, previously wrote a "survivor story" here at New Trajectory, describing how, at age 11, he was hit in the head by a celebratory shooting.  He still has the bullet in his head, and has endured 40 surgeries.  Now he and his father, Greg, work hard to prevent further celebratory shooting.  Here they are, featured in a Philadelphia news article on the topic (click to watch):

Another friend of mine, Henry Louis Adams, also works hard to reduce celebratory shootings, administers a Facebook page (Citizens Against Celebratory Gunfire and Senseless Gun Violence), and recently wrote an article on the topic:

Every year, the names of the injured and fallen will continue to grow, Celebratory Gunfire is increasingly even more a dangerous, irresponsible, and intrusive activity. Many victims were in their places of safety such as inside of their homes, churches, or simply watching fireworks from their own doorsteps on New Year’s Eve night when their lives were altered by a celebratory bullet.

As our heart is still healing from one of the most gut wrenching gun massacres in U.S. history, let us remember the long fight ahead to a safer America. I believe that education is the key in combating celebratory gunfire. I have talked with lots of people over the years and so many people simply cannot understand how someone can be severely injured or killed during this activity. Even more shocking is that everyone that participates in this activity often will never know that they may have pulled the trigger that took the life of a innocent child or adult miles way.

It only takes one bullet to kill the party, as this Miami program against celebratory gunfire advertises.  If you or someone you know is thinking of shooting a gun in celebration, think again.  Every bullet comes down somewhere, and there may be people and property there.  Stick to fireworks.

ADDENDUM (12/31/12):  Check out the interesting comments on the article by Henry Louis Adams.  Also, here is a related article, also featuring Joe Jaskolka, with Philly police pleading with citizens not to shoot for New Year's Eve.

HERE is dramatic audio of the shots fired over Atlanta at New Year's.

A 10-year old girl was shot and is in critical condition, by celebratory gunfire, in Pennsylvania.

Henry Louis Adams, cited in this blog post, shared on Facebook the sounds of Dekalb County, Georgia, at midnight on New Year's.  It sounded like a battleground.  Here is an article about the violence there this New Year's, with Henry featured in it.  Here is one article illustrating the danger, where two men were nearly hit by a bullet that, luckily, richocheted off a window crossbar instead of hitting them inside their apartment:

Another Dekalb County woman spent part of the evening in her husband's bulletproof gear.

HERE is another report, this one of an elderly lady in Los Angeles hit in the foot.

Five people were arrested in Saginaw, Michigan.  Read there for individual stories of victims.

A woman and an 8-year old boy were injured from celebratory gunfire in St. Petersburg, Florida, in the hand and the foot, respectively.
Posted by Baldr Odinson at 4:35 PM