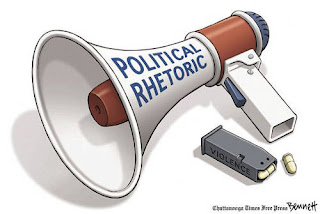 Yesterday afternoon, someone fired a shot at the Obama campaign field office in Denver, Colorado.  The shot smashed a window, but luckily none of the campaign workers inside were injured.  A suspect has not yet been caught.  What could have motivated the shooter?

Last month, a diagnosed paranoid schizophrenic man with a criminal history was nonetheless able to obtain three guns and at least 500 rounds of ammunition and ran a police roadblock where President Obama's motorcade was about to pass through.  He had previously made threats against others, including President George W. Bush.  What could have motivated him to run the roadblock while armed to the teeth?

During the Democratic National Convention, a gun owner who had previously been charged for drug offenses made threats on Twitter to kill the President, threatening to "aim the Assault Rifle at Barack's Forehead" and, in his words, "plotting president Obama's murder."  The Secret Service interviewed him.  What could have led this man to make threats?

In August, a man in Washington state sent emails to the FBI threatening to kill the President, saying, "I will kill the president. I don't give a f*** but you know that."  When U.S. Secret Service agents arrived at the man's door, the guy charged at them with a shotgun, ammo, and pistol.  He had an arsenal of assault rifles at the ready.  Luckily they subdued him without gunfire.  What could have spurred this man to make threats and act violently?

Could it be that these paranoid and violent gun owners could have been motivated by calls for insurrection and conspiratorial thinking from conservative leaders and the NRA?

About a year ago, NRA vice president Wayne LaPierre declared that the President's inaction on gun control was a "big fat stinking lie!" and "part of a massive Obama conspiracy to deceive voters and hide his true intentions to destroy the Second Amendment."  Since then, a number of completely unfounded pro-gun conspiracy theories have been rolled out, accusing the President, specifically, of plotting to hand over the sovereignty of the United States to the United Nations, declare martial law and take away our guns, purposely letting guns go to Mexican drug lords in order to justify taking away guns from Americans, and even staging the mass shooting in Aurora.  The NRA even started a website, www.gunbanobama.com, wherein they expound on LaPierre's conspiracy theory (and make numerous appeals for donations).

And various conservative pro-gun leaders have taken the NRA's call and spread it.  This month, a Republican congressional candidate in Tennessee "welcomed" President Obama to Tennessee by posting a picture of a handgun on his campaign Facebook page.

This summer, the chairman of the Mississippi Tea Party  responded to the Supreme Court's decision to uphold the individual mandate in the Affordable Care Act by calling for armed insurrection, calling our government a "gang of criminals" and writing, " To resist by all means that are right in the eyes of God is not rebellion or insurrection, it is patriotic resistance to invasion. May all of us fall on our faces before the Heavenly Judge, repent of our sins, and humbly cry out to Him for mercy on our country. And, may godly courageous leaders rise up in His wisdom and power to lead us in displacing the criminal invaders from their seats and restore our constitutional republic."

Only the day before that, a former Michigan Republican Party spokesman declared, "There are times government has to do things to get what it wants and holds a gun to your head. I’m saying at some point, we have to ask the question when do we turn that gun around and say no and resist.”

And let's not forget the king of all pro-gun extremist haters, NRA board member Ted Nugent, who earlier this year publicly and loudly announced a threat against the President which warranted a visit from the Secret Service:

Speaking at the NRA's annual meeting Nugent accused President Obama of having a "vile, evil America-hating administration" that is "wiping its ass with the Constitution." He went on to tell a crowd that "We need to ride into that battlefield and chop their heads off in November" and said that "If Barack Obama becomes the president in November, again, I will either be dead or in jail by this time next year." 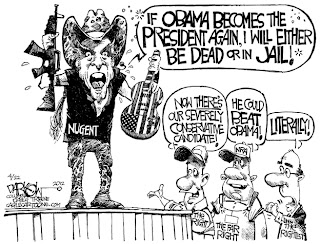 It's not the first time he's done this.  Nugent has said Obama was "a piece of shit" who should "suck on my machine gun." Nugent has a long, long history of illegal, racist, hate-filled behavior.  But he's famous, and a certain fringe of extremists love to pay attention to his hatred and gun-worship.  So much so that Nugent now has a cable TV show on Discovery Channel, wherein he shoots stuff up (and markets his line of ammunition, of course -- follow the money).

Should we hold public figures accountable for calling for violence?  The gun guys, who often echo this hateful rhetoric on their own blogs, argue that these people are only exercising their right of free speech.  Even if the guy who shot the window of the Obama campaign, yesterday, were caught and told police that he did it because of something Ted Nugent said, for instance, Nugent still wouldn't be held accountable.  It's just words, right?  They didn't make the shooter pull the trigger.

Public figures such as these should understand that words matter.  Their followers listen to them for cues on how to act and what to think.  Their words form a cloud of thinking in the minds of the impressionable.  Mix that with a violent or mentally unstable mind and an arsenal of guns, and you have a recipe for murder or insurrection.

When a mentally-unstable and potentially violent pro-gun extremist hears LaPierre say, "The guys with the guns make the rules," and buys into the false assumption that the Second Amendment allows for armed insurrection against our elected leaders, it's a small step toward that extremist arming himself and shooting up a window of a campaign office or running a presidential roadblock with guns at the ready.

Hate-speech, whether toward an individual, our President, or our government, should never be tolerated or spread.  It should be condemned, and those who speak it should be held accountable, in order to make a new trajectory for our communities away from gun violence.
Posted by Baldr Odinson at 12:20 AM