It's late at night.  A gun nut goes into the darkness to confront a child.  A struggle ensues.  An unarmed child gets shot.  The adult shooter claims self-defense, but he's not the one in the hospital... or the morgue.

Sound familiar?  This time I'm not talking about Trayvon Martin and his shooter, child-killer George Zimmerman.   No, this time I'm talking about a different shooting that happened this week in Oregon, very close to where I am.

Here's the facts that have been released so far:  A man in Springfield, Oregon, annoyed at the loud house party across the street at 2:00 AM, goes out in his driveway and yells at the kids there to be quiet instead of calling the police.  Some of the kids come out to him.  The man had brought a gun with him.  According to one of the children, the man puts a gun to the chest of one boy and pulls the trigger, but the gun misfires.  The man then opens fire on the other kids, hitting one boy in the rear end and hitting a 15-year old girl in the thigh.  The children go to the hospital.  The man is questioned by police and released back home.  No arrests.

HERE is the news article and video.

This raises some very important questions.  Since the shooter wasn't arrested, does this mean that he had a legitimate self-defense claim?  But if he had been attacked, why weren't any of the teens arrested?  Why did he bring a gun with him?  Was he expecting to be in a fight?  If so, why didn't he just call the police?  Were the kids who were shot actually the ones trying to attack him, or did he just fire blindly into the crowd?  Alcohol was apparently being served at the party.  Were any of the kids who were engaged with the man actually drunk?  Neither of the victims were apparently cited for alcohol consumption.  And where were the kids' parents during all of this?  How responsible are they, given their kids were at a house party at 2AM?

I don't have the answers to any of these questions.  I've known some teens, even at age 15, who were formidable enough to put up a serious fight.  But does this warrant shooting them?  Look at the picture of the boy and girl who were wounded.  They don't seem so formidable to me.  Given that they were not armed, I can't imagine trying to shoot them to death no matter how angrily they attacked me with their fists.

I am, of course, reminded of the shooting of Trayvon Martin.  Similar questions were swirling when the shooting first happened.  I sat back and read the reports, waiting before I passed judgment.  Not so with the gun nuts, though.  Their first assumption was that Zimmerman was well within his rights to shoot the boy to death.

The gun nuts aren't losing any time doing so in this case either.  They can't know any more than I do about the case, but that doesn't stop them from jumping to conclusions.  Consider the comments from this pro-gun forum:
http://www.northwestfirearms.com/legal-political/95714-springfield-man-shoots-teens-july-1-2012-a.html

I doubt they were innocent bystanders.

Guns. The magic equalizer that gives a single old man the "Right" to ask 10 rowdy drunk teenagers to please be quiet at 2:00am without fear of getting curb stomped in return.

I'm down with donating to his defense fund if he gets tagged with any kind of criminal or civil suit. Not only would they have been digging bullets out of their legs, but they would have had to extricate my shoe from one of their arses, and my empty pistol from the other arse.

In gerneral, I flippin' HATE teenagers! It truly is the most dangerous time/phase of their lives.

If they sue this guy I will definitely donate money to his legal defense. Kids have no respect anymore.

These gun guys don't even have the facts yet, but they're happy to donate money to this guy who just shot two teens.

They don't seem to remember what George Zimmerman did with the money donated to him.  According to the judge in Zimmerman's case, where Zimmerman and his wife were talking code to each other and moving money around to hide it from the courts:

"Notably, together with the passport, the money only had to be hidden for a short time for him to leave the country if the defendant made a quick decision to flee," the judge said. "It is entirely reasonable for this court to find that, but for the requirement that he be placed on electronic monitoring, the defendant and his wife would have fled the United States with at least $130,000 of other people's money." 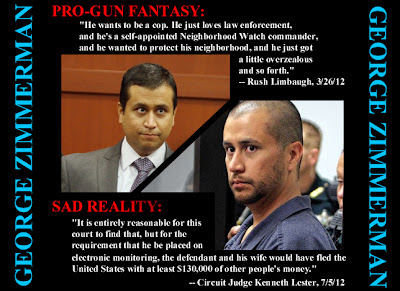 Now Zimmerman has the gall to ask for more donations, even as he posts bail again and is free once more.

Remember how Zimmerman told police that Trayvon had banged his head into the sidewalk so hard that he thought he would pass out?  According to a medical examiner, Zimmerman did not suffer serious brain trauma, only a couple cuts and a broken nose.  Apparently Zimmerman wasn't too concerned, either, since he declined to be seen by a specialist afterward.

And what about the man in the Oregon case?  Was he injured at all by the teens?  The news reports don't say.  He certainly wasn't hospitalized, unlike his victims.  I wonder what he will later claim.  Will he blow his injuries out of proportion, like Zimmerman did, in an attempt to justify his horrific reaction?  Time will tell.
Posted by Baldr Odinson at 1:46 AM