National ASK Day 2012 - Does Your Perception of the Danger of Guns Match Reality?

Today is National ASK Day, when parents are urged to ask about guns and other dangers where their children play.  Is there a gun where your children play, in their friends' homes, in the purse of your babysitter, in your relative's home?  Are you certain?  Have you asked?

And if there is a gun there, is it properly stored, locked and unloaded?

Have you talked to your children about avoiding guns without proper supervision, or what to do when they find a gun?  Have you urged them to Speak Up about guns they encounter?

All too often, gun owners underestimate the danger of their weapons around children.  They erroneously believe that their children have been trained sufficiently to avoid their guns, or that their children could never get into their guns.  Unfortunately, these assumptions are often wrong, with tragic consequences.  Over at the Kid Shootings blog, I see numerous examples every week of children who get hold of guns where they live or visit and shoot themselves or others.  For instance, HERE is a recent example where a 9-year old boy in Oklahoma got into his family’s gun safe, got a loaded gun, and unintentionally shot his 3-year old brother.  HERE is another recent example, where a 7-year old boy in Mississippi got hold of his family’s loaded, unsecured shotgun and shot his 4-year old sister in the face.

Below is a very enlightening graphic, put out by the Center to Prevent YouthViolence.  As you can see, the danger of guns to children is higher than the perception of danger by gun owners.  Please read this carefully and discuss it with other parents (click on the picture to read it more clearly). 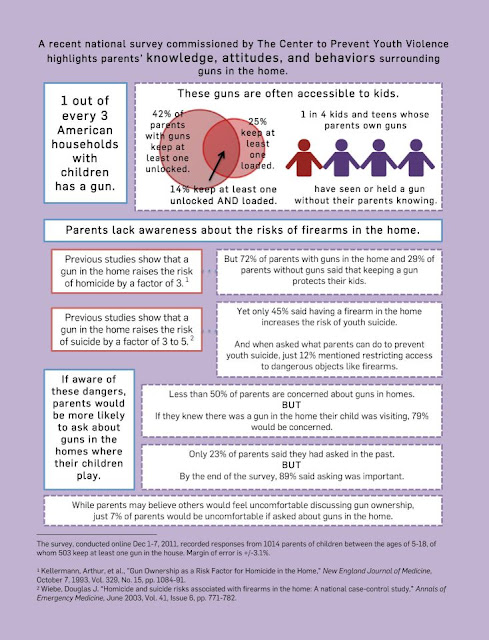 While we at Ceasefire Oregon do not recommend having guns in homes with children at all, if you feel strongly that a gun is needed, please store it locked and unloaded, with the key or combination closely guarded.

The safety of our children is our most important duty as parents.

Here is a previous post on the ASK campaign:  http://newtrajectory.blogspot.com/2011/02/asking-saves-kids.html

And here is an article I recently published on the topic, in Metro-Parent Magazine (see page 28):  http://www.metro-parent.com/issues/june11/june11.pdf


Let's make a new trajectory for our community, away from gun violence.


UPDATE:  The "Art on Issues" blog had a great posting which, at the end, comments on the misperceptions of children and guns.  I recommend you read it.  Here is a good excerpt:

First, a study showed the vast majority of adults (around 87%), regardless of gun ownership, geography, race, gender, education level, income, or child age, believed that their children would not touch guns they found, 52% reasoning that their children were “too smart” or “knew better” (ref).  This unrealistic expectation for children was demonstrated in another study (ref).  Twenty-nine (29) groups of boys aged 8-12 years were observed in a room where a gun was hidden.  Many of the children found and handled the gun, and half of the children actually pulled the trigger (more than 90% of these boys reported having had some sort of gun safety training).  Although the NRA offers its Eddie Eagle training program, a study in 6 and 7 year olds compared the effectiveness of that program to a behavioral skills training program (ref): “…children who received behavioral skills training were significantly more likely to demonstrate the desired safety skills in role-playing assessments and in situ assessments than were children who received Eddie Eagle program training”.

....
A reasonable question would be how many of the NRA’s own membership have lost children, who otherwise may have done things differently, had the organization they financially supported been proactive rather than obstructive regarding the public health risks of firearms?