The Dangers of Vigilante Justice 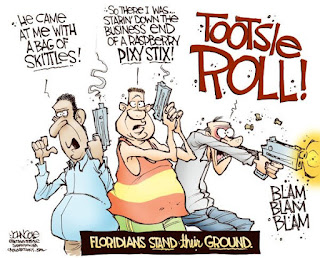 Not quite an hour south of me here in Oregon, down in the little town of Dorena, people are up in arms – literally – about lack of adequate sheriff’s patrols and the potential that more deputies will be laid off.  Last summer there was a crime spree in the area.  So now Dorena citizens are calling for their own sort of solution:

Minnick and his neighbors are not taking the news sitting down.

"Since it's been in, I sleep really good now," he said.

So far so good, I thought.  I’m a strong advocate of neighborhood watch programs and good relations with neighbors, for the sake of watching out for each other.

But then the article took a dark turn:

And when the alarm goes off, neighbors get the call - not the Sheriff's Office.

"They are the ones that get the call from the alarm system, if it goes off and we're not home," he said, "and they come armed."

Minnick's message to would be thieves and burglars?

"We know who you are," he said, "and if you start again, there will be some opposition."

Excuse me?  Yes, I read it again.  They’re talking about forming posses.  In short, they are preparing for “vigilante justice.”

This is certainly nothing new in the world of conceal carry gun guys.  A common dream of theirs, which they repeat again and again as justification for carrying guns everywhere in public, from Starbucks to grade schools, is that, if they witness a crime (even just a theft), they’ll swoop in and save the day with guns drawn and blazing.  They imagine themselves playing “Wyatt Earp.”

Some gun guys will deny it.  I have no doubt that the majority of those who carry concealed handguns do it for self-protection out of a paranoid fear of their fellow man.  But a disturbing number of them also carry a gun with the notion that they can play the role of a freelance policeman, like those people in Dorena.

I’ve commented on this before, when a group of gun extremists in California hoped to incite a riot by the Occupy movement there and then use their weapons to “protect” their community.

HERE is a case from Minnesota where a man with a concealed gun witnessed a thief pistol-whip an old woman then steal her purse.  Instead of calling 911, he decided to play policeman by pulling his gun and chasing the pursesnatcher.  He confronted the thief in an alleyway and shot him dead, claiming that the thief had turned to shoot him.  At that point, it was his word against a dead man’s as to what had happened.  The old woman was only slightly injured.  Were the contents of the purse worth the thief’s life?  Was the crime worth it for the vigilante to risk his own life confronting the thief?

HERE is a more recent case from just a few days ago, in Texas, where a customer with a concealed handgun witnessed the theft of a necklace at a pawn shop.  Instead of calling 911, the customer decided to pull his gun and chase down the suspect.  The suspect wasn’t armed, but at one point tried to get into a  car, making the vigilante think he was going for his gun.  The suspect eventually got away, after dropping the necklace.  Was the theft of a necklace from a pawn shop worth the vigilante risking his life for?  Was the thief’s life worth taking for it?

HERE is another recent case, where a man was in bed and heard a commotion from his neighbor, who had just been robbed at gunpoint.  He jumped out of bed, armed with a loaded handgun, and chased down the suspect.  He was thinking, according to the article, “OK, that’s not going to happen. Not on my watch.”  his watch?  Who appointed him as watchman?  The article makes him out as a hero, but he’s lucky he wasn’t shot by the suspect.  The robbery victim was apparently unharmed.  Was what was robbed worth the life of either the “hero” or the suspect?

There are many, many such cases as these.  They’re easy to find.

By now, if you’re even slightly in tune with issues of guns and gun violence, you also have heard a lot about the shooting of Trayvon Martin, the 17-year old boy who was innocently walking through his gated neighborhood when a self-appointed neighborhood watch man, George Zimmerman, armed with a concealed weapon and feeling empowered by Florida’s “shoot first” law, took it upon himself to trail and then accost Trayvon, against the advice of 911.  When the boy put up a fight, armed with nothing more than a can of tea and a bag of Skittles, Zimmerman shot Trayvon dead.

There are so many red flags with this case that it boggles the mind, such as the fact that Zimmerman had a violent past but was allowed to carry a concealed weapon anyway, the way Zimmerman ignored the 911 operator and felt obliged to get into an armed confrontation with the boy despite the fact that police were on their way, the assumption by the police of Zimmerman’s innocence, the assumption by the police of Trayvon’s guilt, the apparent stereotypes that Zimmerman had of Trayvon based on the boy’s clothing and skin color, and the lack of an arrest of the shooter.

But at least as disturbing to me as any of those things is the root of the issue, the one thing that led to the confrontation in the first place:  the desire by a man with a concealed weapon to play “Wyatt Earp” and be a freelance policeman.  People carry concealed handguns for two main reasons:  fear of others, and a sense of self-empowerment.  Fear of others can quickly become paranoia, and a feeling of self-empowerment can sometimes push people over the edge into irrational behavior in a crisis situation.  Both of these things likely happened in Trayvon’s situation.  Add to this the recent study that people who hold guns are more likely to imagine others being armed with guns.  This, too, apparently happened in Trayvon’s shooting, where Zimmerman is heard on the 911 call saying that he thought Trayvon was holding something suspicious, like a gun.

There is an irrefutable fact:  the average citizen with a conceal carry license is not even remotely trained like a policeman.  They aren’t as versed in the laws, they haven’t been trained in crisis intervention, negotiation tactics, or how to remain rational or steady in a shootout, and they likely haven’t had as much practice with their weapon.  Training requirements are little to none nearly anywhere in America for them, and they are less accountable to anyone for their potentially lethal decisions than law enforcement professionals.  So the pro-gun daydream of saving the day with their guns is a potentially lethal one, not just for the criminal or the gun owner, but also for anyone who happens to be around them when the shootout happens.

I can understand the frustration felt by the citizens of Dorena.  They just want to feel safe.  Sadly, bond measures intended to fund law enforcement in this area almost always fail, and they are particularly voted against by rural voters like those in Dorena.  If they want to improve their safety, arming everyone around and forming posses to come to the rescue of a victim isn’t the answer, as Trayvon’s family can now attest.  The answer is better funding to improve the number of deputy patrols, as well as the many non-armed options to hardening their homes against invaders.

There are very good reasons why we have police forces instead of relying on vigilantes to protect our communities.  Let’s hope the citizens of Dorena don’t re-discover them.


Addendum (4/26/12):  Another recent case, where a man and his son "exercised their rights" by grabbing their AR-15 assault rifles and holding an interracial couple hostage, thinking they were breaking in next door.  Turns out they were the new neighbors.  So much for their vigilante "justice."  http://blogs.ajc.com/jay-bookman-blog/2012/04/24/second-amendment-is-not-an-excuse-for-vigilantes/?cp=14#comment-936862
Posted by Baldr Odinson at 1:31 AM