A Table At The Eugene Saturday Market

I spent most of today at one of my favorite places here in Eugene, Oregon: the Eugene Saturday Market. A landmark for our town, this market covers about a block and has handmade art and crafts ranging from fine pottery to crochet hats, professional photos to tie-dye tutus, jewelry made of precious metals to jewelry made out of woven hemp. There's music, food, and an excellent farmer's market with organic produce, bread, and deserts.

Yesterday was gorgeous, with clear blue skies and warm weather. This morning, as I set out the door, it was cloudy, drizzling, and cold enough that I needed my jacket. My family in Arkansas and Texas are roasting in a heat wave with temperatures around 100. Here in western Oregon, I still contemplate making a fire in the woodstove each night. Go figure. Anyhow, I didn't let it get me down. 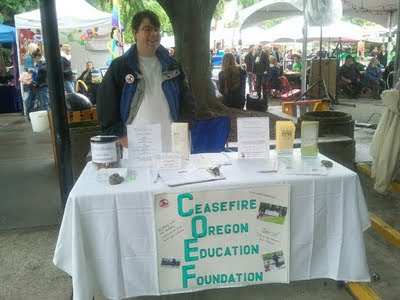 I sat at an information table at the Saturday market today for Ceasefire Oregon Education Foundation. I set up around 10AM and stayed until around 2:30. I love sharing my story and my mission to reduce gun violence, but the unpleasant weather kept most people away from the market today. Normally the market is so packed that you can't walk past five stalls without bumping into someone. Today, sometimes five minutes would go by at a time without someone walking by. In fact, I think it wasn't until after noon before the patrons of the market actually outnumbered the people in the stalls.  Darned rain and cold!  I was thankful that the stall I got was covered.

But I didn't let the unseasonable weather get me down. I was right behind the main stage, and heard some great folk and blues music. I also met some very interesting people and had some good conversations. I love people-watching. The market is a great cross-section of the diversity of our community. In a quick scan of the crowd you can pick out hippies and yuppies, homeless and rich people, young kids and old seniors, runaway teens and close-knit families.

One person selling decorative nightlights shared her story with me about her and her husband being attacked by a drugged out intruder at their home. Despite the trauma of the attack, in which they were both injured, she hadn't in any way let insecurity sink into her. Though she is more careful than before, she hadn't felt the need to go pro-gun and arm herself as a result. If she had pulled out a gun, someone likely would have died that day, quite possibly her or her husband. She is thankful the attacker wasn't armed. She signed our email list and told me how supportive she was (and snapped this picture of me).

And then there is the guy in the stall next to me. He was even more to the left of me, politically. But I guess that's to be expected, given he sells far-left postcards and lapel buttons with political messages. We had a good discussion about guns in America compared to the impressions he had heard while in other countries. Foreigners he had talked to think America is awash in gun violence and that we are insane not to regulate guns as they do. I agree. One need only consider the comparative death rates.

I spoke with several dozen people during the day, including a quick visit by Mayor Kitty Piercy and her husband, as well as a homeless guy named "Frog" who sells homemade joke books (he's a regular at the Market, and known by everyone). Like I said, visitors to the Market are a true cross-section!

One other person who stuck out was the lone pro-gun guy who paid me a visit. A 60-something white guy with a Cabella's hat, it wasn't hard to guess his stance before he spoke. He asked what Ceasefire Oregon stood for, and when I told him we work to reduce gun violence in Oregon, he said, voice dripping with condescension, "Sounds an awful lot like you mean gun control."

"Yes," I said, "if by gun control you mean stricter regulation of guns, that is something we support, as well as education about the dangers of guns in the wrong hands."

He scrunched up his face and said, "So you want to ameliorate our second amendment rights, huh?" (He said ameliorate, which is a word that means "improve", but from his tone it was clear that didn't know the meaning of the word and he really meant "remove", or did he mean to say "attenuate"?).

"No," I said, "our goal isn't to remove peoples' second amendment rights, unless they are criminals or mentally ill."

With a sly smile he started walking away, as if he had made some point to me. But I got his attention again by mentioning our ASK campaign, where we encourage parents to ask about guns where their children play and how they are stored, to decrease the chance for deadly accidents, as an example of our educational goals. "And who do you ask?" he asked.

"The parents," I replied, then invited him to read a copy of the article I recently published on the topic. I think he was trying to bait me into a discussion about talking to kids about gun control instead of their parents.

"Uh, huh," he said again, as if I were lying about something, then he left without another word, smirking. He didn't take a copy of the article, by the way. ;)

Despite the weather, I would like to thank the organizers of the Saturday Market for allowing us to have the non-profit booth (they allow any given non-profits to have the booth only one time during the summer), and I look forward to sitting there again next year.

And speaking of the ASK campaign, please note that June 21 is National ASK Day. If you have children in their teen years or younger, I urge you to ask about guns wherever they visit, including the homes of their friends and your own relatives, and insure that if there are any guns there that they are kept locked and unloaded during their visit.
Posted by Baldr Odinson at 12:32 AM