Important Data Trends the NRA Doesn't Want You To Know

One silver lining to the mass shooting tragedy in Arizona has been a return, however brief, to a public discourse on gun control, and maybe some legislative action.  It's sad, frankly, that it takes the death of six people, including a federal judge and nine-year-old girl, and the wounding of 14 others, including a congresswoman, by some gun-nut loony in order to get us to this talking point, but at least we're here.  So let's talk.
There has certainly been a lot of conversations, too.  Discussions on the ease of getting guns despite having serious mental health issues, extended magazines that used to be illegal and should be again, the need for better background checks for gun purchases, and Arizona's lax gun laws.  As usual, the NRA has been mum on the whole tragedy.  No surprise.  Gun deaths are an inconvenience when you are trying to convince the public that more guns and less gun regulation is good.
A friend of mine shared an interesting article.  It's not really about the massacre in Arizona, but rather looks at a state-by-state comparison of gun regulation versus deaths, and ranking the states accordingly.  "20 Deadliest States" the headline reads.  How does your state rank?  Go to the link and find out.
But my friend went on to say he didn't quite trust it.  "The Wyoming data is a bit disingenuous," he wrote, "There are only about 700,000 people in the state, and they largely live rural lifestyles, even in the cities."  I thought this was an interesting comment, so I decided to crunch the numbers, and then I compared them to state populations and the density of population in those states.  I even graphed it out.  What I found was very interesting.
By now you've noticed the graphs.  Don't run away!  I promise they're painless!  I'll try not to immerse you in statistics and numbers.  Promise.  There's no test.
Gun control advocates like myself are very aware of the alarming data that comes from studying shooting statistics.  We are also very aware that the pro-gun lobby wants you to ignore them.  It's okay, though, I know you probably aren't interested in seeing columns of numbers and all those horrifying statistics.  But here are some results that are very hard to ignore.
The first graph is a "bubble" graph.  Each bubble represents one of the 50 states (sorry, I couldn't figure out how to get Microsoft Excel to label each bubble separately) and plots it against a gun law rating that was assigned to that state by the Legal Community Against Violence and the number of deaths / 100,000 population.  This data is from the article I mentioned above.  That rating from LCAV is based on the number and type of gun laws in that state, such as background checks, mental health checks, concealed carry regulation, etc.  The higher the rating, the stricter the gun laws for that state.  Using the number of deaths per 100,000 people is a way of normalizing states for population differences (a value of 12, for instance, would mean that if you took 100,000 people at random, 12 of them likely would be shot in their lifetime), based on available shooting data.  I then created a bubble with a third set: population density.  The larger the bubble, the more densely-populated the state (number of people per square mile).  I then had the program draw a trendline, which illustrates any trends. 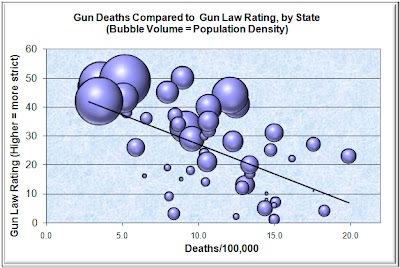 (correction:  the X axis should read "Gun-Related Deaths / 100,000".  There may be a few bubbles hidden by others.  Sorry, but I wasn't able to figure out how to add the state names, but you can click on the links to find individual state data.)
As you can see, there is a very clear trend:  The more strict the gun regulations in a state, the fewer people die.  The less strict the gun regulations in a state, the more people die.  THIS is the data that the NRA and pro-gun people don't want you to see.  It goes completely against their argument that having less firearms regulation makes for a safer society.  This is why they try to steer their arguments away from questions of community safety and deaths and start puffing up over constitutional rights to arm themselves.
The other thing you can see in the bubble graph goes to the point that my friend made.  But it's the opposite of what he and I expected.  What it shows, based on the sizes of the bubbles, is that those states that have the highest population densities actually have fewer shooting deaths per capita!  States like New Jersey, New York, and California, where people are more crammed together, have fewer deaths.  Conversely, those states that are less densely-populated and are more permissive with gun regulations, like Arizona and Alaska, have the highest per capita gun deaths.  It seems clear to me that better regulation outweighs the potential for violence that population density may introduce. 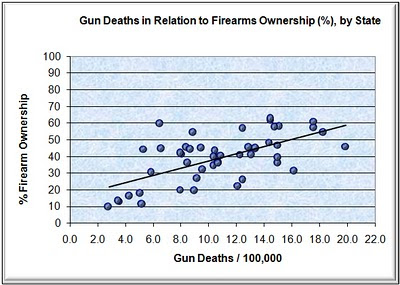 The second graph is taken from LCAV data.  It directly addresses the pro-gun argument that more legal gun ownership = safer society.  Once again, their argument is hollow.  The exact opposite is true.  As you see by the trendline, states with a higher percentage of legal gun ownership have more per capita gun deaths.  Once again, Oregon falls right in the middle of the trendline, with gun ownership of about 39% and a little over 10 gun deaths per 100,000 people.  How does your state rank?  Click on the "data" link above.
I haven't scared you away with numbers yet, right?  Good.  Now, what are you going to do with this information?  Here's what you can do:  every time you hear pro-gun people state those same, tired, hollow arguments, send them here.  Let them see the numbers for themselves.  See how quickly they try to change the conversation away from issues of public safety!  And when they start hiding behind the Constitution and its second amendment, ask them what the document's main goal is:  protecting the welfare of our people, or mindless devotion to possession of deadly weapons?


UPDATE (1/19/11):  Here is another link with data that goes very well with this data, including maps of gun death rates by state and information on variables (such as poverty or strictness of gun laws) that have correlative associations:
http://www.theatlantic.com/national/archive/2011/01/the-geography-of-gun-deaths/69354/#