Pro-Gun Activists Call For Assassination Of Our President, Even On The 50th Anniversary Of JFK's Death 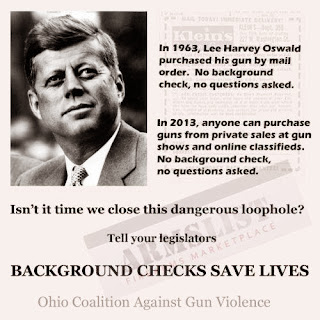 This Friday was the 50th anniversary of the assassination of President Kennedy.

There are many remembrance ceremonies, including in Washington D.C.’s Arlington Cemetery and at Dealey Plaza in Dallas, Texas.  From an article:

A half-century later, the assassination still stirs quiet sadness in the baby boom generation that remembers it as the beginning of a darker, more cynical time. The anniversary ceremonies reflected that solemnity, with moments of silence, speeches by historians and, above all, simple reverence for a time and a leader long gone.

“A new era dawned and another waned a half-century ago, when hope and hatred collided right here in Dallas,” Mayor Mike Rawlings said at the largest memorial service, in Dealey Plaza, the scene of the Nov. 22, 1963, shooting.

These ceremonies for JFK are solemn reminders of the man who did so much for our nation to help its citizens be kinder to each other and less discriminatory, and to uplift our nation.

But JFK’s death also serves to remind us how armed extremists with a bone to pick can too easily resort to violence to achieve their fevered goals.

When it comes to making our nation safer from gun violence, sadly not much has changed in the last 50 years.  Lee Harvey Oswald mail-ordered the rifle he used, which is now no longer legal to do thanks to the Gun Control Act of 1968, and we now have the Brady Bill to require a background check with every gun purchase from a gun shop (a law that has now stopped two million gun sales to prohibited persons since it was enacted), but you can still arrange for the purchase of a gun online in your state with no background check, and you can still meet a private seller on the street and pay cash for an assault rifle, with no background check.  As my blogger friend at Common Gunsense says, “Where is the common sense?” (see her latest post, also about JFK, HERE). 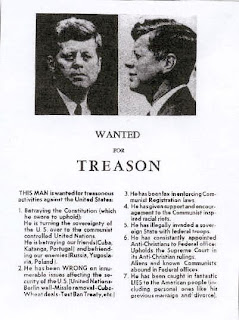 These days, extremist conservative forces try to hijack the legacy of JFK.  The NRA (whose publication, American Rifleman, helped Oswald purchase his gun) is even profiting off of JFK by selling a commemorative coin in American Rifleman magazine!  But we can’t forget how, at the time, these forces vilified every attempt by him to change our society for the better.  Consider the “Wanted for Treason” poster they made of him (to the right).  In that poster, they accuse him of “betraying the Constitution” by "turning the sovereignty of the U.S. over to the communist controlled United Nations."

Sound familiar?  That’s because those same forces now say the same things about our current president, another young, liberal, president who is making good with his ideals.  They stop at nothing to vilify him, including making up wacko conspiracy theories about him, particularly regarding gun rights.

Compare the JFK "treason" poster from the 60's to this one made recently of Obama.

Once again, hope and hatred are colliding, as Mayor Rawlings put it, but now on a national scale. 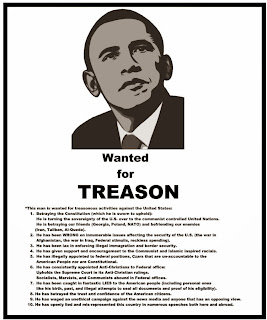 Now, pro-gun activists openly state their desire for President Obama to be assassinated in Dallas.  That’s right:  these extremists, who consider themselves to be “patriotic” and “law-abiding,” are committing a felony by threatening to kill our president and treasonously calling for armed insurrection.  The pro-gunners dream about him being assassinated just like JFK, in the same plaza where, in October, they rallied with their assault rifles, in yet another public display meant to intimidate the public, or, as they put it, “exercise their rights” (just like others have).

Comments have been left to this effect at a couple of pro-gun Facebook pages.  The Coalition to Stop Gun Violence exposed them in a recent post.  Comments include:

“Drive him past the old book depository.”

“Take him via Dealey Plaza.”

“I wonder if he will get the same Texas welcome as JFK.”

“Maybe another president will be sworn in on Air Force One as in the past.  Everyone say’s that history will repeat it’s self [sic].”

The Second Amendment doesn’t give them the right to do many of the things they think it can, and certainly not to threaten the life of our President or dream about his assassination.

But if they can’t assassinate him in Dallas, there’s always armed revolt.  In the extremist vision that they daydream about, a million gun owners will rally to the White House and call for Obama to come out and surrender himself to them in a “citizen’s grand jury.”  They even set a date:  November 19.  Of course, the date came and went and nothing happened.  Fringe groups like these are fringe precisely because they don’t have a following, but that doesn’t keep them from being dangerous.  In most countries, it would be illegal to make such threats of treason.  From the article:

On Monday, the same un-American, Larry Klayman, released a new declaration of independence and announced that on November 19th he and fellow Islamophobes, extremist Christian leaders, and right-wing gun fanatics will converge on the White House and depose the Obama Administration, members of Congress, and the Supreme Court. According to Klayman, President Obama is a “despot, socialist, ultra-leftist “Muslim” who, with his Democratic minions, passed a destructive piece of legislation”(Affordable Care Act) that Klayman claims is unconstitutional. Within the new declaration of independence is a laundry list of imagined slights that claims after “warning him and his administration of attempts by their legislature to extend an unwarrantable jurisdiction over us, we must acquiesce in the necessity, and hold them, as we hold the rest of mankind, Enemies in War, in Peace Friends.” Klayman’s group clearly holds the United States government and Barack Obama as “Enemies in War.”

It goes on with their rants, accusing Obama of all the usual ridiculous accusations (he’s Islamic, anti-Christian, tyrannical, etc.) and names some other fringe groups that associate with him, such as Gun Owners of America (they, and their founder, Larry Pratt, are certainly no strangers to wacko pro-gun conspiracies).  The article continues:

Klayman’s threat of a violent revolution if the President, congressional leaders, and the Supreme Court do not meet their list of demands and be “abolished from all allegiance to the current government’s regime, including political connection between them and the current government, is to be totally dissolved” is treason. Calling on, and inciting, millions of other Americans to join in the overthrow of the United States government is sedition, particularly under the threat of violent force, but it is glaringly obvious Klayman’s group eschews U.S. law and the U.S. Constitution.

Reading through the list of grievances against the President and the government exposes Klayman and company’s motivation is rank Islamophobia, hatred of minorities, and a desire to dissolve the Union into a collection of independent nation states. 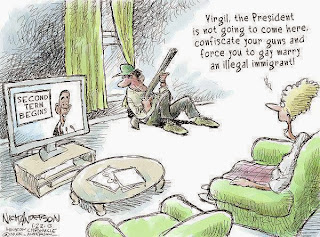 I wish someone could claim that this is just a one-time rant.  Unfortunately, talk like this is rampant among the pro-gun blogs and at their rallies.  You just can't get past their lunatic belief that Obama's coming for their guns, a belief reinforced by the pro-gun lobby until it is a fevered call for insurrection.  Consider, for instance, open calls for war at the recent pro-gun rally held at the Alamo, by conspiracy theorist and pro-gun voice Alex Jones.  From an article:

“If the people who died here can see us, and I believe they can, I promise you they’d be proud of each and every one of you,” he continued. “We’re not going to lay down if you offensively attack us. If it’s a war they want, it’s a war they’ll get.”

These pro-gun activists aren’t, by any means, representative of the rank-and-file gun owners of America, who are actually quite moderate and agree with gun violence prevention activists, like myself, in a number of regards (such as the 80-90% agreement on requiring background checks for all gun sales, including private sales).  Like all extremists, though, these activists think they represent everyone who possesses a firearm.  Moderate gun owners need to speak up and demand an end to these extremist calls which make them all look bad in the eyes of the rest of Americans.

I think a fellow blogger over at a blog called Gunsense says it best, when he indicates that this isn’t just a problem with the activists, but with the militarization of our entire culture.  Referring to the recent case of pro-gun extremists ambushing a group of four Moms Demand Action women as they ate their lunch at a Mexican restaurant:

The Open Carry Texas group that converged outside of the restaurant broke no laws.  No one was shot.  No one was injured.  A group photograph was taken, of course, with the American flag and children and guns.  This particular optics—guns, men, women, children, flag, public place—has become a meme now for the open-carry enthusiasts, and an image of great hilarity for the gun-control folks.  I suspect Open Carry Texas will reconsider future actions of this sort—they are still being ridiculed across the country, even as I write this.

But these images, and the actions that give rise to them, are part of the gradual militarization of our culture, and when you militarize a culture, you must expect military solutions to civil disagreements.  That in a nutshell is the problem.

Sadly, one of those social customs is to turn against the very government that has allowed, or even encouraged, carrying of guns in public, “standing your ground” against any perceived threat, and allowing treasonous talk without consequence.

It’s time for everyone to call out the extremists for what they are – people who are purposely calling for violence -- and then turn our attention back to the goals that JFK tried to instill in America – calls for unity and understanding.  As President Kennedy once said at a White House speech,

Violent revolution is the goal of these extremists.  When you live your life for your guns, there can seem only one means by which to solve your problems.

Let's make a pledge for a peaceful revolution, and make a new trajectory for our community away from gun violence.
Posted by Baldr Odinson at 10:19 PM