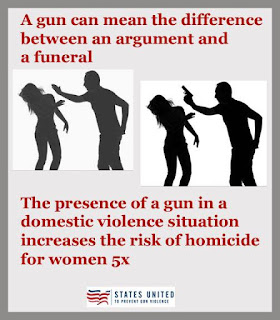 Guns and domestic violence go hand-in-hand.  Here in Oregon, 55-71% of domestic violence murder victims are shot, and 44% of women murdered with guns in the United States were killed by a current or former intimate partner.

And yet, Oregon is one of the states with most lax gun laws regarding protecting women from domestic violence shootings.  Here in Oregon, convicted stalkers can still keep their guns, as can those who have a restraining order.  And though a felony domestic assault can stop a husband from owning a gun if he abuses his spouse, boyfriends and domestic partners with misdemeanor domestic assault convictions don't count; they can still own a gun.

This issue touches me personally.  I have one friend whose abusive husband held a gun to her head, execution-style, and threatened to kill her.  Another friend lost her sister in a shooting by an abusive husband.  And there are other cases that I don't mention due to privacy of the victims.

Here are just a few recent cases of domestic violence shootings in Oregon so far this year.:

And many more make headlines every week around the nation.  How many of these cases could have been prevented if the state had done a better job of keeping guns out of the hands of violent spouses and partners?

Things are about to change, thanks to Oregon Senate Bill 525.  This bill has been passed in both the Senate and the House, with bi-partisan support passing the House 51-8, and now goes to the Governor, who is expected to sign it.  It is modeled after the recently-passed California "Gun Violence Restraining Order" law.

What does the bill do? This bill will prohibit possession of a firearm or ammunition by a person with a restraining order protecting intimate partners or children of intimate partners, or people convicted of misdemeanor domestic violence crimes against family members.

And since restraining orders are temporary, so too is the prohibition of gun ownership in those cases.  If they clear their name, their rights are restored. 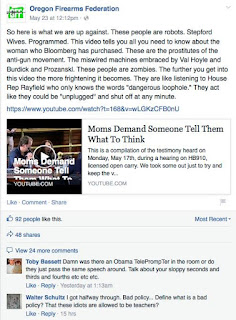 The NRA, and the GOP leadership they pay, oppose these measures.  They prefer to keep arming the abusers.  Any gun sale is a good one to them.  Follow the money.  This, despite the fact that 68% of GOP voters support these laws, as well as 71% of women.

But I guess it's not surprising that the gun lobby would be out of touch.  They've been supportive of the abusers for years.

The NRA and the Gun Owners of America have said such laws "stigmatize" those poor, violent, gun-owning wife-beaters. We wouldn't want that, would we?  I mean, the right of a wife-beater to own a gun must surely trump the lives and welfare of their wives, right?

Consider also the Oregon Firearms Federation (OFF), the "no compromise" gun lobby in Oregon, which opposes the bill because people with restraining orders haven't yet been convicted of a crime and have only been charged through "assumptions."  Nevermind that a judge weighed the evidence and deemed that person dangerous enough to tell them to keep their distance. 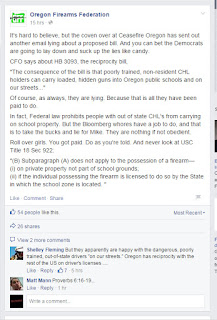 But then, OFF has never been one to respect women.  Consider, for instance, a recent post to the OFF Facebook page, describing the female representatives of Moms Demand Action Against Gun Violence as "prostitutes of the anti-gun movement" as well as "Stepford Wives," "zombies," and "robots."  (see screencapture above, left).

And in another OFF Facebook posting, they described female members of Ceasefire Oregon as "Bloomberg whores" as well as "liars" belonging to a "coven."  (see screencapture at right)

These sexist, arrogant, and crude attempts to belittle women are part and parcel of the gun rights movement.

I'm happy, at least, that Oregon legislators have seen past it and done what is right to create a safer environment for Oregon women.  Now, we need to extend that to the rest of the nation!

Ceasefire Oregon would like to thank the thoughtful legislators who voted for this bill.  Now, on to the Governor!

UPDATE (6/18/15):  Governor Brown has now signed the bill in to law!  Our thanks go out to the Governor and all the legislators and volunteers who made it happen.  Domestic violence victims throughout Oregon will be safer now.  The bill goes into effect January 1, 2016.