1)  Which of the three branches of government is responsible for creating new laws?

2)  Which of the three branches of government is responsible for interpreting existing laws?

3)  Which of the three branches of government is responsible for enforcing existing laws?

Now for the tough questions:

4)  Who heads the Executive branch of government?

5)  To which branch of government does law enforcement belong?

Answers:  4) The President of the United States, 5)  Executive 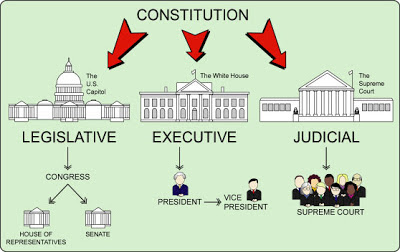 These are very basic tenets learned in a child's first social studies classes.  I think I recall learning these basic facts as early as 5th grade.  The three branches of government insure a separation of power to help prevent tyrannical rule and to best represent the will of the American people.

Later today, President Obama, on the recommendations of a panel headed by Vice President Biden, will release his recommendations for increased gun regulation.  Likely this will include bans on assault weapons, high-capacity ammo magazines, and increased background checks, including for private sales.  It will be a major step toward reducing the insane level of gun violence in our country. (UPDATE: he has now made those recommendations)

Unfortunately, even before the President can release his proposals, at least three rural sheriffs have announced, in the most public way possible, that they will refuse to enforce any new laws for gun regulation.  Without even seeing the proposals first, they have stated in no uncertain terms that those regulations are against the Second Amendment and are unconstitutional.

"Any federal regulation enacted by Congress or by executive order of the President offending the constitutional rights of my citizens shall not be enforced by me or by my deputies, nor will I permit the enforcement of any unconstitutional regulations or orders by federal officers within the borders of Linn County, Oregon.

"In summary, it is the position of this Sheriff that I refuse to participate, or stand idly by, while my citizens are turned into criminals due to the unconstitutional actions of misguided politicians."

“My office will not comply with any federal action which violates the United States Constitution or the Kentucky Constitution which I swore to uphold.

“Let them pull that stuff in other places if they want, but not in Jackson County, Kentucky.”

And over in Pine County, Minnesota, Sheriff Robin K. Colewrote:

"I do not believe the Federal Government or any individual in the Federal Government has the right to dictate to the states, counties or municipalities any mandate, regulation or administrative rule that violates the United States Constitution or it various amendments. I would view any such mandate, regulation or administrative rule illegal and refuse to carry it out."

All three of these Sheriffs attempt to couch their insurrection in Constitutional verbiage.  But it's hogwash.  They need to retake their social studies classes.  They would fail my little pop quiz.

You see, it isn't the duty of a sheriff to interpret law.  They don't wear robes when they're on duty and aren't in the Judicial branch.  And they don't get to make the laws like those in the Legislative branch.  Their job is to enforce the laws.  They don't get to determine what is and what isn't constitutional.

And they report to the President of the United States.

Refusing to enforce a law is against their oath of office, a betrayal of public trust, and insurrectionist.  It won't be tolerated.  They enforce the rule of law, separate from whatever opinions (or gun fetishes) they may have.

If they feel a law or executive order is unconstitutional, then there is a process by which they can address it:  they take the case to the Legislative branch through court action.  But they still have to enforce the law in the meantime.

It's time for these three sheriffs to step down, and the public they represent need to call them out for their insurrection.  They are a disgrace to their office.

ADDENDUM (1/16/13):  An additional sheriff can be added to the list, from the very pro-gun area of rural southern Oregon:  Sheriff Glenn E. Palmer, from Grant County, Oregon.  Like the others, he also tries to justify his insurrection with constitutional language beforehand.  From Sheriff Palmer:


"As Sheriff for Grant County, Oregon, I too will publicly state that I will refuse to participate, or stand idly by, while the people I represent are made into criminals due to your unconstitutional actions."

ADDENDUM (1/16/13):  Here's another rural Oregon sheriff that has joined the insurrection and decided he can decide what is constitutional or not:  Sheriff John Hanlin of Douglas County, Oregon, who writes with the same exact statement as Mueller:


“[A]ny federal regulation enacted by Congress or by executive order of the President offending the Constitutional rights of my citizens shall not be enforced by me or by my deputies, nor will I permit the enforcement of any unconstitutional regulations or orders by federal officers within the borders of Douglas County Oregon.”

The exact same statement, with the slight change in the name of the county, was also made by Sheriff Jim Hensley of Crook County, Oregon.

Given the exact same language is being used, this is part of a insurrectionist cabal among these three sheriffs (Mueller, Hanlin, and Hensley).

ADDENDUM (1/16/13):  The 23 Presidential Executive Orders have been released.  See them here.  From the article:


It does not appear that any of the executive orders would have any impact on the guns people currently own-or would like to purchase- and that all proposals regarding limiting the availability of assault weapons or large ammunition clips will be proposed for Congressional action. As such, any potential effort to create a constitutional crisis—or the leveling of charges that the White House has overstepped its executive authority—would hold no validity.

So what, exactly, do these insurrectionist sheriffs consider "unconstitutional" about these orders?

UPDATE (2/1/13):  The National Sheriff's Association just released a statement, regarding new gun laws.  Basically, it states (surprise!) that they will uphold the Constitution, including the Second Amendment, but that it is up to the courts to determine the constitutionality of laws, not the Sheriff.  From the statement:


UPDATE (9/25/13):  Thankfully, insurrectionist sheriff Tim Mueller is now retiring.  Perhaps now Linn County, Oregon, will have a sheriff willing to uphold the Constitution and enforce the law of the land instead of acting like he is above the law.
Posted by Baldr Odinson at 2:00 AM